A legacy worth fighting for: the Left and the Jewish community 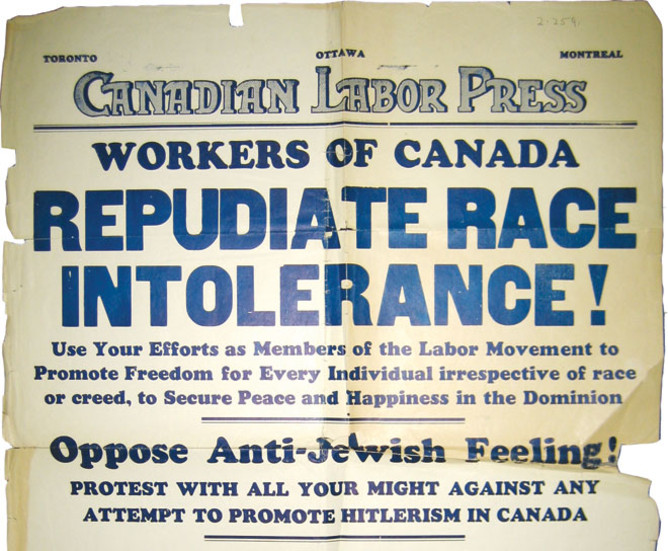 The recent emboldening of xenophobia and acts of hate in Canada should be seen through a much longer history of racism and discriminatory policies in this country.

Until the 1960s, for example, Canadian workplaces, labour unions and even immigration policies were designed to favour white, Western Europeans – to the exclusion and detriment of racialized communities and non-Christians.

While institutions of the Left now advocate for the rights of minorities and vulnerable Canadians, such as the recent work of the Canadian Labour Congress (CLC) to fight anti-Muslim bigotry, this was not always the case. What drove the Canadian labour movement and other Left actors to be the advocates of diversity and inclusion they are today?

The story of this important sea change on Canada’s Left is complex and has received scant attention. So too has the contribution of Canada’s Jewish community to the Canadian Left and its transformation on issues of discrimination.

What we do know is that Jewish labour activism in Canada played a vital role in the fight against discrimination, and that contribution is a story worth telling.

The Canadian Jewish Labour Committee and the fight against Discrimination

The Jewish community’s campaign against racism was first galvanized by the Canadian Jewish Labour Committee (JLC).  Founded in 1936 and modelled on the American Jewish Labour Committee, the JLC’s membership peaked at more than 50,000.  With strong links to the Workmen’s Circle, the JLC represented trade unions with a large Jewish membership, including the International Ladies’ Garment Workers Union, the Amalgamated Clothing Workers’ Union, and the United Cap, Hat and Millinery Workers’ Union.  The JLC’s values centered on social democracy and anti-communism. In the early 20th century, most Jewish people in Canada were members of the Workmen’s Circle.   Following the Russian Revolution, the group split into social democrats, who remained in the Workmen’s Circle, and communists, who began the Labour League.

The JLC had strong ties from the outset to the Cooperative Commonwealth Federation (CCF), exemplified by the activism of members such as Morris Lewis, Secretary of the JLC, and his son, David Lewis, who would become the first National Secretary of the CCF.  Both shared social democratic values and advocated a progressive approach to human rights.

Throughout much of the 1940s, Canadian Jewish community activism focused on the admission of Jewish refugees from Europe and supporting survivors of the Holocaust arriving in Canada. Following the war years, attention turned to combating structural antisemitism in Canada, in the labour movement, and in the workplace.  At that time, many Canadian universities, boardrooms and other institutions retained quotas on membership, which restricted Jewish participation.  Similar policies were to be found at banks, educational institutions and professional associations, in which Jews were prevented from attaining higher appointments.

At the political level, numerous Canadian politicians fanned the flames of antisemitism by accusing Jews of being communists and an inherently malignant influence on society.  While antisemitism in formal politics was more muted in some regions, it surfaced with virulence in Western Canada through the Social Credit Party.

Being a victim of xenophobia was hardly restricted to the Jewish community.  Japanese, Chinese, Blacks and Canadians from Eastern and Southern European countries also faced formal and informal prejudice, to say nothing of the treatment of Indigenous peoples.  An early JLC report stated:

Anti-Semitism, anti-Negroism, anti-Catholicism, anti-French or anti-English [sentiments]… and union-smashing are all part of a single reactionary crusade of hatred and destruction.

To begin to tackle discrimination in the trade union movement, the JLC appointed Kalmen Kaplansky, a Polish Jew, as its National Director.  Kaplansky had previously been Vice-Chair of the Montreal JLC and a member of the International Typographical Union with close links to the CCF. His sole mandate was to fight prejudice.

Working through the trade union movement, Kaplansky lobbied the Steelworkers’ union to introduce a motion at the 1947 Canadian Congress of Labour (CCL) to call for ‘vigorous action’ on the part of the CCL and its affiliated unions in ‘the fight for full equality for all peoples, regardless of race, colour, creed, or national origin.’  The motion was adopted and, in 1948, Kaplansky established a “permanent committee on racial tolerance.”

Like other labour movements, the Trades and Labour Congress of Canada (TLC) was also despoiled by racial and religious prejudice.  As early as 1944, the JLC had persuaded the TLC to establish a National Standing Committee on Racial Discrimination and, at its national convention, Kaplansky released a report on behalf of the Committee that argued religious prejudices were “dangerous ideas…being used by our enemies to divide labour and to distract the attention of the working people of this country from the real issues facing them.”  A resolution condemning racial prejudice within trade union committees also passed.

Kaplansky engaged grassroots union activists in these initiatives as well, establishing in Toronto, in 1947, the first Labour Committee to Combat Racial Intolerance.  Open to all union members, similar committees soon followed in other Canadian cities such as Montreal and Winnipeg.  Along with anti-racism advocacy at trade union meetings, the committees turned their attention to fair employment practices and combating workplace discrimination.

Dresden, Ontario and the fight for a Fair Workplace

Until the 1950s, discrimination in the workplace and in business was widespread.  The Canadian Jewish Congress (CJC) made anti-workplace discrimination legislation a principal concern, and the issue came to the fore in the Ontario town of Dresden.

With a large minority Black population, many restaurants and businesses excluded Blacks from accessing their services.  In response, the Black community formed an association to demand a non-discrimination requirement for local businesses applying for a license.  The Toronto Civil Liberties Association advocated for the Dresden activists at the provincial level and led a coalition of 35 human rights advocacy organizations, including trade unions, women’s groups and ethno cultural groups, along with the Canadian Jewish Congress.

Despite not recognizing labour discrimination as an issue of wide public concern, the Ontario government finally responded, following years of pressure and lobbying from the coalition, by passing Canada’s first Fair Employment Practices Act.  Ultimately, in 1954, a coalition including the CJC, the TLC and the CCL persuaded the Ontario government to adopt the Fair Accommodation Practices Act.  Despite its passage, discrimination in Dresden persisted.  It was only after further activism on the part of the Toronto Labour Committee, led by Sid Blum, David Lewis, the former CCF national director and leadership from the Black community, that prejudiced business owners in Dresden were finally prosecuted for discriminating against Blacks.

The decades-long battle for fairness in the trade union movement turned Canadian labour from a bastion of hostility toward minorities to one of Canada’s most important institutional advocates against discrimination.  This dramatic transition is due in no small part to the tireless groundwork laid by the likes of Kalmen Kaplansky.  The Jewish Labour movement and the organized Jewish community acknowledged early on that all boats would rise if discrimination was eradicated in Canada and that a diverse coalition of voices would be more effective than individual voices advocating in isolation.

We rightly celebrate the contribution of specific Canadian Jewry to Canada’s Left in the form of its most celebrated figures, from Dave Barrett, former Premier of BC, to David and Stephen Lewis in Ontario and at the national level, and even early communist elected officials like J.B. Salsberg and Fred Rose.  However, their individual leadership should be regarded as part of a long tradition of the Jewish community’s determination to fight discrimination and injustice, which stretches back into antiquity and continues to make Canada a better place today.

In recent months, Canada’s organized Jewish community has campaigned to strengthen hate crimes legislation, played a leadership role in a national coalition to protect transgender Canadians in the Criminal Code and human rights law, and advocated for laws to end genetic discrimination in Canada.  The Centre for Israel and Jewish Affairs has also galvanized Jewish Canadians to campaign on behalf of those with disabilities and to strengthen access to palliative care.

Incidents of antisemitism and racism are on the rise in Canada. The organized Jewish community of Canada stood proudly at the forefront of establishing anti-discrimination laws and championing the values that underpin them.  Canadian Jews remain resolutely committed to a Canada that embraces diversity and equality in politics, in particular on the Left.  Sadly, there are those on the Left who are not immune to antisemitic trends, and they risk undermining the truly progressive elements in the movement that are committed to combatting hatred in all its forms, regardless of where it appears on the political spectrum.

To know the history of antisemitism is to know the dangers of xenophobia and intolerance, which can corrode the social fabric and humanity of whole countries.  Jews that overcame discrimination and led progressive movements in Canada helped to establish laws and institutions that benefit other marginalized groups as well.  The Canadian Jewish community can be proud, looking at Canada’s many milestones in human rights and inclusion, that Jewish activists played a leading role from the earliest days.

This most important of fights continues today, on the Left and in wider Canadian society, to secure the gains of the past and fight for a more inclusive future.

Matthew Godwin is staff at the Centre for Israel and Jewish Affairs.  He has previously worked for a number of NDP MPs and several Labour Peers in the British House of Lords.

Image of poster from 1933 via the The Vancouver Holocaust Education Centre.