How many Canadians have "middle-class jobs"?

There is broad agreement across the political spectrum that we need to create more 'good middle-class jobs', especially for young people leaving the educational system, recent immigrants to Canada, and aboriginal persons.

Middle-class jobs can be seen as those which provide decent pay, working conditions, and benefits; a measure of employment security; and, above all,  opportunities to build skills and progress over time in a career. In today's labour market, these kind of jobs generally require a professional or advanced technical qualification acquired through postsecondary education.

There is a well-grounded sense that these kinds of jobs have become increasingly hard to find as private and public sector employers have restructured jobs to make them more insecure and precarious, and as job creation has often taken place in lower-paid sectors of the economy, especially in private service industries like retail trade and food services where unions are weak.  Many young people leaving the postsecondary education system, as well as recent immigrants, are struggling to find a “career” job suited to their qualifications.

The table below looks at jobs held by “core workforce” employees aged 25-54. It leaves out employees under age 25 since many in this age group work in lower-paid and often part-time, seasonal, and temporary jobs which can be seen as transitional to the kind of jobs they will (hopefully) be able to find later in life. Unlike younger and older workers, the great majority of core workers are employed full-time (95% of men, and 81% of women in this age category), and 90% are in permanent jobs. 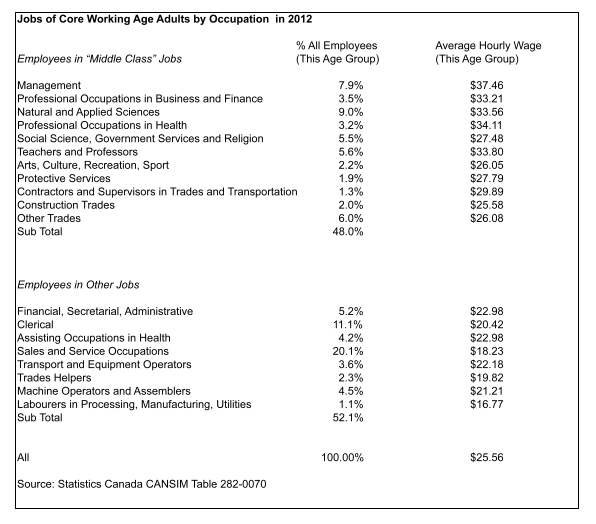 The first part of the table shows the proportion of the “core workforce” who are employed in occupations which pay more than the average hourly wage of $25.56 per hour for this age group, or an average of about $50,000 per year for those in full-time, full-year jobs. The vast majority of these jobs require a university or college education, or an apprenticeship in the case of the skilled trades.

Of course, some employees in occupations paying below average wages can also earn a good wage. A top chef makes much more than the average cook, for example. But, by the same token, not everyone in an above average pay occupation receives above average wages. And jobs in higher-paid occupations – especially those held by younger people – can be insecure.

The key point to take home is that a little under one half of all core working-age Canadians are employed in what could be considered to be “good middle-class jobs” (or better), defined as working in a highly skilled occupation paying above average wages. This is close to  the proportion of 20 to 25 year old persons who are enrolled in post secondary education.

The flip side of that key point, of course, is that a little over half of all core working-age Canadians are employed in occupations which do not generally require a postsecondary qualification, and pay significantly below-average wages. Wages in these occupations are clustered well below the average at around $20 per hour, or about $40,000 per year for a full-time, full-year job.

That wage likely falls short of what many Canadians would consider to be enough to afford a “middle-class” lifestyle, especially for families with children without two full-time earners.

Jobs in sales and service occupations, the lowest paid occupational group, are concentrated in industries like retail and accommodation and food services and employ about one in five core working-age employees. They are most likely to not provide full-time hours, secure employment and access to career ladders. Very few such jobs are unionized. Other relatively low-paid, low-skill jobs are clerical and administrative support jobs in offices; support jobs in health care and personal care; and unskilled and semi-skilled blue-collar jobs outside the skilled trades in industries like manufacturing, construction, utilities, and transportation.

The fact that fully one half of core working age employees are in lower-paid, relatively low-skill occupations is somewhat at odds with the widespread idea that we live in a “middle-class” society.

Over time, there has been a modest shift towards professional and technical occupations as well as to lower-paid occupations. The good news is that there are a lot of “middle-class” jobs that young people with relevant  advanced skills and qualifications will be able to access as baby boomers retire.

But, lower-paid and more insecure occupations will remain a very big part of the jobs landscape for many years to come.

It is a mistake to believe that education and skills training alone will significantly improve the overall quality of jobs. Just increasing the proportion of tomorrow's workforce with postsecondary qualifications will not automatically increase the number of jobs  requiring such qualifications, and indeed will intensify the competition for good jobs.

It took strong unions to transform once low-paid, blue-collar manufacturing jobs into middle-class jobs in the era of broadly-shared prosperity. One of today's key challenges is surely to improve the quality of jobs at the lower end of the skills spectrum.