Over the past 20 years, income inequality has been growing faster in Canada than in other similar countries. During this period about one third of all income growth has gone to the top 1%, leaving precious little to be shared among the remaining 99%. We know the inequality problem all too well, but what is the answer to addressing it?

There seem to be three main pillars that provide effective solutions: progressive taxation, a robust safety net, and ensuring fairness in the workplace. This third pillar includes raising the minimum wage in a transparent and predictable manner, improving associated employment standards legislation, and generally making sure labour laws have kept pace with what’s happening in workplaces across the country.

This last point -- workplace fairness -- is really where organized labour can make a difference particularly on wages. We’ve seen effective campaigns around minimum wages and precarious work in the United States, sponsored in part by various unions. Pushed by organized social movements, several cities have announced $15 minimum wages, and McDonalds and Walmart have been pressured into raising wages, though admittedly only marginally for some workers.

Compared to Canada, frustration has been brewing with inequality for far longer south of the border. There, union density is lower, anti-labour legislation is more prevalent, and social safety nets are weaker. Minimum wages are also lower, and economic mobility is more limited. But frustration is starting to show up in Canada too. Here, minimum wages haven’t kept pace with inflation, and aren’t enough to keep even full-time workers above the poverty line.

The chart below shows the average minimum wage in Canada, adjusted for inflation. Only in the late 1970s was the minimum wage enough to get workers over the Low Income Measure threshold. 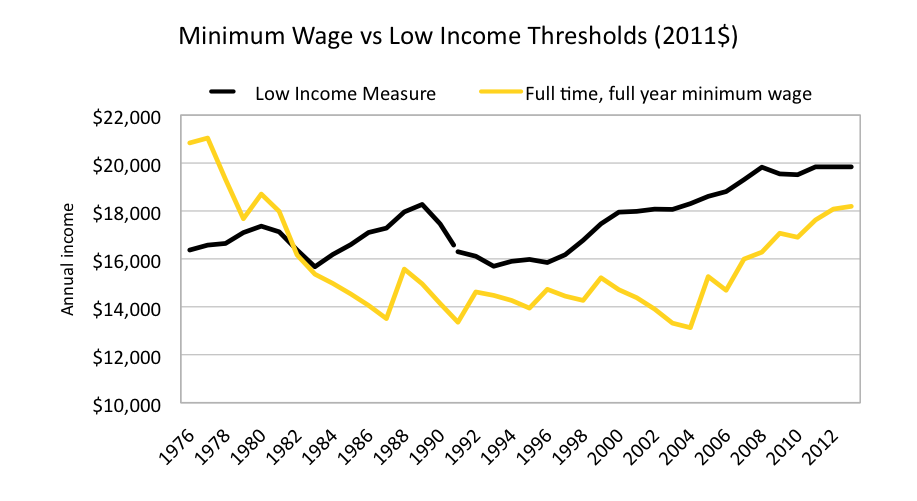 You may be surprised to learn that more than seven out of 10 low-wage workers are employed by medium to large employers, such as many retail and food service workers. We are often told that minimum wage and low-wage workers are young, are working in a transitional stage towards better-paid employment and therefore there is little cause to get so worked up about the low wages.

A look at the data below shows that’s simply not true. More than half of workers who earn less than $15 per hour are over 25 years old, and more than a third are women between 25 and 64. 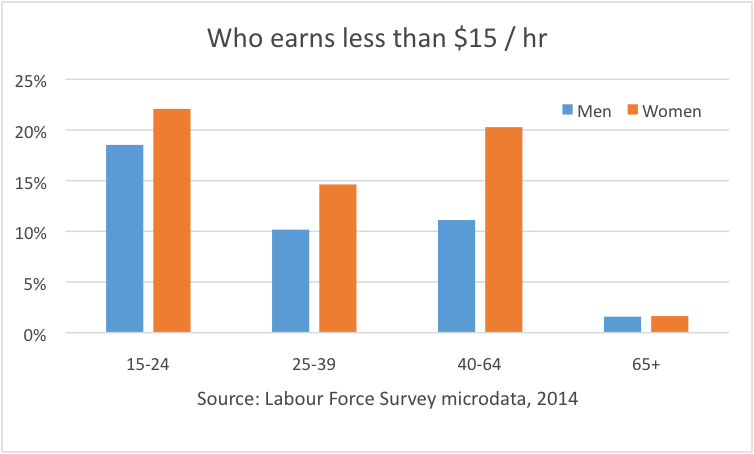 One corollary to the "they’re just kids" argument is the similar "they’re just students." That's not accurate. In 2014, nearly 80% of workers earning less than $15 per hour were not students. 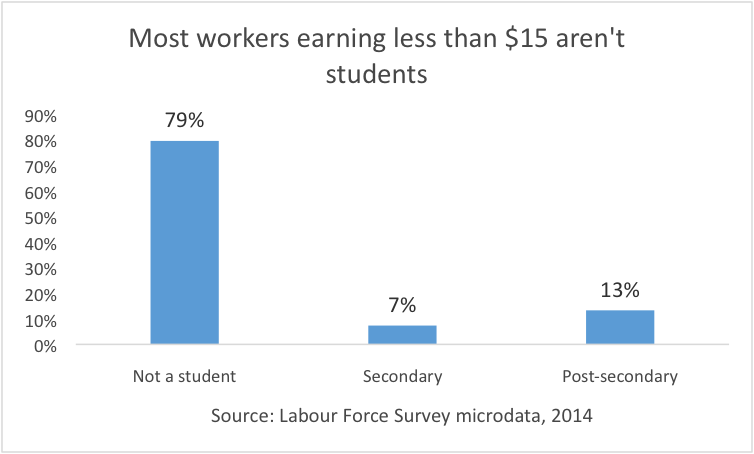 We also know that certain marginalized groups tend to be stuck in low wage and precarious work. Unfortunately, it’s now more difficult to gather up-to date data for these marginalized groups as the National Household Survey that replaced the mandatory Census is unreliable.

But walk into any fast food restaurant in your community, and notice who is working those jobs. Low-wage workers are disproportionately Indigenous Canadians, racialized workers, and new Canadians -- especially women in each of those groups.

Another element of the challenge to raise wages is the changing structure of the labour market and the shift towards more precarious forms of employment. Although we don’t have a perfect measurement for precarious work, there is significant overlap between precarious work and part-time, temporary, and low wage work.

Full-time permanent jobs are far less likely to be low wage. On the other hand, as the table below illustrates, more than half of part time jobs are low wage, whether they are temporary or permanent. While far fewer men work in part-time jobs, nearly 70% of those that do earn less than $15 / hr. 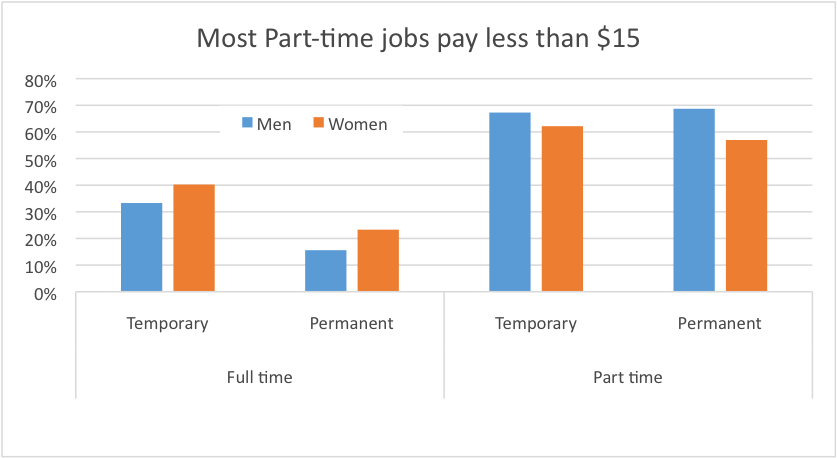 To respond to these various challenges, Canadian are mobilizing all over the country to fight for fair wages.

An Ontario campaign, #15andfairness for example, makes the link between the minimum wage and other employment standards. This campaign defines fairness as access to paid sick days, predictable hours and scheduling, and meaningful enforcement of employment laws so that all workers have dignity and respect at work.

The BC Federation of Labour launched its “Fight for $15 BC” in November 2014, and have been holding events on the 15th of each month. The Halifax and Dartmouth Labour Council joined with a coalition of community groups to launch a “Fight for $15 / Living Wage” campaign in February 2015. You can follow them on twitter at @nslivingwage.

Organized labour has long stood in solidarity with low-wage workers and fought for decent wages for all. But now there are organized campaigns in three provinces, making direct links with the U.S. “Fight for $15” campaign.

The focus of each campaign is slightly different, reflecting the lived realities of workers in each community. But the central message of these campaigns is clear --  workers across Canada need a raise, and need to be treated fairly at work.

Angella MacEwen is a senior economist at the Canadian Labour Congress and a Broadbent Fellow.

Photo: arimoore. Used under a Creative Commons BY 2.0 license.