Labour market data in Canada is easily available by sex, age, and region. We spend a great deal of time talking about these factors. More recently, Statistics Canada made labour market data available on CANSIM by landed immigrant status, going back to 2006. This factor is included less often in most labour market analysis, and too few know that it is even available.

But if you want to know how racialized workers or Indigenous workers (First Nations, Métis, and Inuit peoples) are doing in the labour force, you basically have to rely on the census … oh, wait. And on top of eliminating the census, the Harper government shut down the First Nations Statistical Institute.

So imagine my delight when a recent search on the issue turned up an article from the Centre for the Study of Living Standards about Indigenous employment that cited the Labour Force Survey as a source.

I should have already known that the Labour Force Survey asked an Aboriginal identity question. A quick call to Statistics Canada revealed that this data is freely available on request, but is limited to First Nations, Métis, and Inuit peoples living off reserve (since the LFS doesn’t survey persons living on reserves).

I plan on doing a more thorough analysis, but I thought that I would post a few quick insights, and get the word out so that anyone who is interested can call and get the data for themselves.

Some of this data confirms things that we 'know', but having the hard numbers (see first graph) helps when we're calling for action. For example, unemployment is a huge issue for Indigenous young workers living off reserve -- before, during and after the recession. The unemployment rate reached a high of 22.5% in 2009, and was still 18% in 2013. 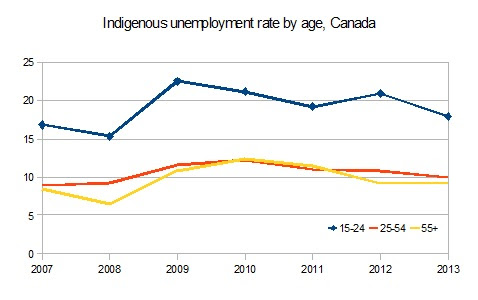 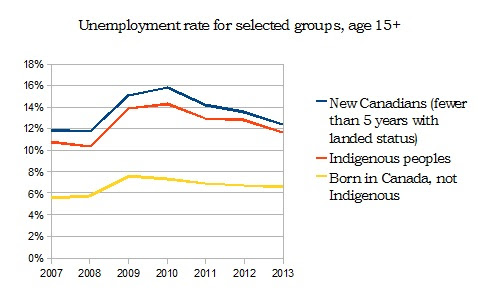 So whenever we're talking about labour market strategies and good jobs, it's important to keep in mind that for some workers there are systemic barriers that need to be addressed. Hopefully, access to labour market data for Indigenous workers and new Canadians can be one way that we convey the need for action.

In the meantime, for more information about Indigenous workers and the labour market in Canada, here are some studies: a CSLS study using LFS data from 2007 – 2011; a Conference Board of Canada's employer driven study from 2012; and a 2011 paper in aboriginal policy studies by Tracy Friedel and Alison Taylor, which analyses the colonial discourse in Indigenous labour market development policy in Northern Alberta.