Unemployment is higher than you think 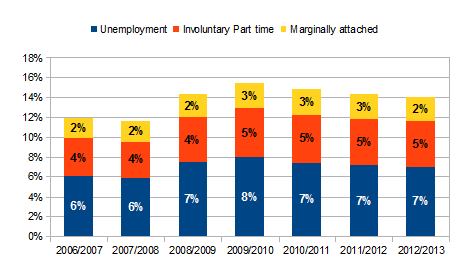 The chart above shows the national annual average for July – August (just to get the most recent data in there). It shows a pretty consistent trend – the broader unemployment rate is pretty close to double the official unemployment rate. And yes, I’ve added the marginally attached to the denominator as well.

When we include involuntary part-time and marginally attached persons, the unemployment to job vacancy ratio sky rockets. For Canada the most recent official number is 6.3, but the broader definition of unemployment yields a number of 13 people who would like a job for every job opening.

For Ontario, the jump is more dramatic. The most recent official number for Ontario is 8.6, but the *real* ratio is 18.4. Ontario has about 43% of expanded unemployment, but only 30% of the job vacancies. 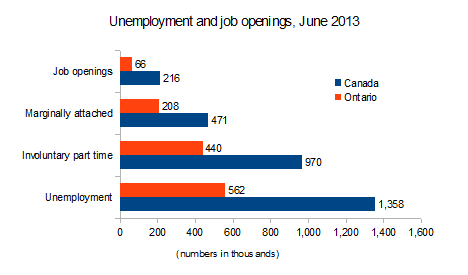 It’s worth noting that the job vacancies counted by Statistics Canada are the number of jobs that were open at the end of the month. We don’t know how long these jobs have been open, because Statistics Canada doesn’t ask. But in a healthy job market, there are always going to be some jobs open. 216,000 job openings represents only 1.5% of employees.

Over 2 million Canadians are employed in temporary employment as well, giving us an additional 10% of the labour market that is precariously employed.

That paints a pretty stark picture of our current labour market situation. 14% of the Canadian labour market is unemployed, 10% are self-employed with no employees, and 10% are employed in temporary work. (These percentages are all based on total labour market + marginally attached = about 19.5 million.)

September 17th was the two-year anniversary of the first Occupy Wall Street gathering. The issues that were raised by OWS are still crying out for a serious policy response.

This article originally appeared in the Progressive Economics Forum.

Photo: drtongs. Used under a Creative Commons BY 2.0 licence.