It has been over a year since the federal government was found to be racially discriminating against First Nations children on reserve by the Canadian Human Rights Tribunal (HRT).

Two subsequent non-compliance orders from the HRT and a parliamentary order to comply with the ruling later and the Canadian government continues to discriminate against Indigenous children living on reserve.

Following last year’s HRT ruling, the Trudeau Liberals were ordered to remedy the situation by, amongst other measures, immediately addressing what the court determined was a $155-million-dollar funding shortfall. This was a conservative estimate of the amount by which child and family welfare services on reserve were underfunded compared to services offered to non-Indigenous children.

The ruling and subsequent contempt orders required an immediate injection of $155 million dollars for child welfare to make up the shortfall. The government was also ordered to immediately spend $120 million dollars implementing Jordan’s Principle which would give First Nations children living on reserve access to the same medical and therapeutic services and supports (things like wheelchairs and crutches) as non-Indigenous children.

The Liberal government and Indigenous and Northern Affairs Canada (INAC) have spent over $500 thousand dollars fighting the issue in court, and continue, in the context of ongoing compliance hearings, to refuse mediation and contest the order. In the meantime Indigenous children as young as eight continue to die of suicide due to federal denial of adequate prevention funding and infants of rheumatic fever from lack of on-reserve medicine.

This example of racialized discrimination is far from singular. Rather it is evidence of the pernicious colonial fabric from which contemporary Canadian political-economy continues to be woven. The government’s ability to ensure and define property rights is dependent on the suspension of Indigenous territorial and jurisdictional authority, and this in turn is crucial to its ability to attract investment and generate resource revenues.

Canada’s is a national economy premised on access to contested lands and resources. And this (as Cindy Blackstock has well noted) is reinforced in fiscal policy. The government’s refusal to meet the terms of the HRT ruling reminds us that Canada's economy systematically devalues Indigenous life.

According to Indigenous and Northern Affairs Canada (INAC) documents filed with the HRT in relation to the current compliance hearings, the Liberals appear to have spent $71 million dollars (indicated in budget 2016) to make up the $155 million shortfall, and $11 million dollars toward the $120 million required to implement Jordan’s Principle.

Carolyn Bennett, Minister of INAC, for her part has insisted in a bizarrely cagey and telling interview with the CBC that her department has spent “almost 200 million” dollars to address the HRT ruling.

It is difficult to find evidence of this.

As noted above, the 2016 Federal budget allocated $71 million in 2016-17 towards “ensuring the safety and wellbeing of First Nations children”. That accounts for 54% of the $155 million required and was in fact allocated previously by the Conservative government. Assuming the money actually went out, the figure presumably refers to the “dollars to [child welfare providing] agencies”  Minister Bennett was referring to as proof of concrete government action in her CBC interview on the Current.

It was during this interview that Minister Bennett repeatedly referred to the “exciting... Comprehensive Community Planning” processes her government was funding as evidence of action on the HRT ruling. The Liberal government is indeed funding Comprehensive Community Planning (CCP) but to the tune of a lot less than the remaining gap to meet the $155 million in funding.

According to internal INAC documents retrieved through accessed to information requests, it seems the Liberals are counting spending on a host of priorities that are completely unrelated to child welfare and the spirit of the HRT ruling. In fact, their spending priorities seem to have much more to do with mining and corporate access to Indigenous land and resources.

The CCP is funded through the Liberals’ Strategic Partnership Initiative (SPI) to which the previous Conservative originally provided $16 million dollars, and which the Liberals revived with a promise of $5.6 million dollars over 3 years, starting in 2016/17.  The Liberals are also proposing to fund CCP from the First Nations Infrastructure Fund (FNIF) from which INAC is hoping to leverage approximately $700 thousand dollars.

CCP occupies only a tiny portion of the $5.6 million SPI budget. It shares the money with several other initiatives such as a “community well being pilot project" for the Mattawa First Nations in the Ring of Fire development area implemented (according to documents obtained under access to information legislation) “as a condition of consent to development”.

It is not clear what this money and program has to do with child welfare or the themes addressed in the HRT decision. According to internal INAC documents, the Liberals’ injection of $5.6 million dollars of SPI cash is intended "to support ... First Nations mining readiness activities [in the Ring of Fire Area]" with "added emphasis on individual and community well-being to help reduce barriers to FNs who want to participate in and benefit from economic opportunities in the Ring of Fire area." 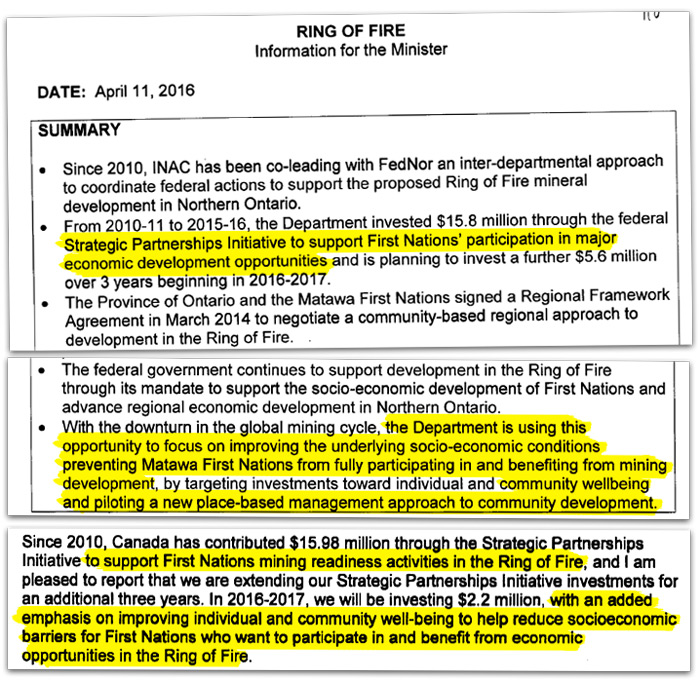 Money flowing to projects and initiatives in extractive sector

As regards the “nearly 200 million” Minister Bennett referred to in her radio interview, further questions need answers. Examples of government initiatives which support corporate access to Indigenous lands are much easier to identify than those for child welfare.

Is the Minister referring to the 2016 Liberal budget promise of $255 million dollars over two years to the FNIF? A fund primarily dedicated to resource development in the North, and described in as partially earmarked for developments which increase regional infrastructure in the Ring of Fire area?

Or perhaps she is referring to the $40 million over two years to the Strategic Investments in Northern Economic Development Program run through the Canadian Northern Development Agency, a program that amongst other things supports “[c]apacity [d]evelopment” initiatives such as the “development of inventories of skills and services available in the North.”?

Budget 2016 provided $87.2 million for NRCan projects that support research in forestry, mining, and resource mapping; $45 million dollars over five years to NRCan on technical and geoscience initiatives to fuel development in the Ring of Fire mining area; and $20 million dollars to renew the costly Mineral Exploration Tax Credit (METC) that encourages investment in mineral exploration and development.

In June 2016, the government also passed new legislation permitting mining and exploration firms (including oil and gas) to either reduce taxable income by the total amount spent by a firm to address Indigenous rights in the exploration and development of a new mine, or to flow these costs through to investors (who can then deduct them from their taxable income at a rate of 100%) in exchange for cash to finance exploration initiatives. The latter of these constitutes an organized abandonment of approximately $35 million dollars per year in public revenues to directly subsidize corporate access to Indigenous lands.

Altogether, these initiatives more than make up the $155-million-dollar shortfall and $120 million required to implement Jordan’s principle.

Make no mistake, the CCP, SPI and FNIF are not initiatives designed to increase desperately needed health and welfare funding to keep children alive, in their communities and with their families.

These are programs crafted by the Conservative government and retained by the current Liberal one to deliberately sideline Indigenous rights and undermine Indigenous political and jurisdictional authority over their lands. They are programs that promote market-based solutions to the political problems of Indigenous sovereignty and dispossession and in so doing sustain and protect the jurisdictional authority of the Crown. They author the sickening distributional arrangements that pit the value of Indigenous life against the valued life of capital.

Yet none of it is being seen by Indigenous children and their families.

Anna Stanley is a Visiting Fellow in the faculty of Environmental Studies at York University and is a Broadbent Policy Fellow.