Changing the Game with Bernie Sanders

Last month I got to spend some quality time with my fellow social democrat, Vermont Senator Bernie Sanders.

As you may know, for decades, Bernie has been leading the fight for a universal healthcare system in the U.S. - a fight that was at the core of his inspiring campaign to be the Democratic Presidential nominee.

In October the Broadbent Institute, along with our partners, arranged for Bernie to come to Canada. During his trip he spoke to a capacity crowd at the University of Toronto’s Convocation Hall about what the U.S. can learn from Canadian health care.  Over 250,000 people viewed the livestream online, with a further 1.4 million people reached by the social media surrounding the event.

It was clear to everyone watching that Canadians, in fact,  have a few things to learn from Bernie Sanders. His speech was significant for two reasons.

First, he is an unapologetic social democrat who has inspired a whole new generation of voters with those values in a country where hyper-capitalism is king. The enthusiasm he has generated has carried over to young people here in Canada and around the world.

Second, Bernie urged us to keep on fighting, to maintain and improve our healthcare system. He knows Canadian healthcare is under constant threat not just from right-wing forces, but also from complacency. He told the audience to “speak loudly” about the virtues of universal healthcare, because our public system not only needs to be protected, but urgently needs to be expanded.

“Canadians are well known throughout the world as gentle and kind people. Be a little bit louder; stand up and fight for what you have achieved!” Bernie Sanders - Toronto 2017

At the conclusion of Bernie’s Convocation Hall speech, it was my privilege to take the stage to thank him on behalf of all the event partners.  I focused my remarks on his groundbreaking “Medicare for All” proposal that he unveiled this September in Washington.  His bill would establish a system that not only includes payment for doctors and hospital care like ours, but also provides dental services, eye care, psychological care, and pharmacare for everyone.

What he is proposing actually surpasses Canadian Medicare!  For Canadians, these aspirational goals are very important. Bernie’s ambition for a better quality of life for all challenges us to build on the successes of our past and imagine a better future.

Beyond our common social democratic values, Bernie and I also shared a similar experience growing up.  I was reminded on Remembrance Day that we both came of age in the post-World War II period, when people believed that if you worked hard anything was possible.  At that time, families like ours were coming into the newly formed middle class. Our hopes and expectations were high.

Sadly, for many today, that hope has dimmed.

You may recall it was the unregulated capitalism of the 1920s that produced the raging inequality and misery of the Great Depression. Bernie Sanders and I agree that the growing income inequality that we see today across North America and around the world is creating the same misery and discontent that in the 1930s led to anti-democratic far right-wing movements.

This is why the Broadbent Institute’s “Change the Game” project is so important! 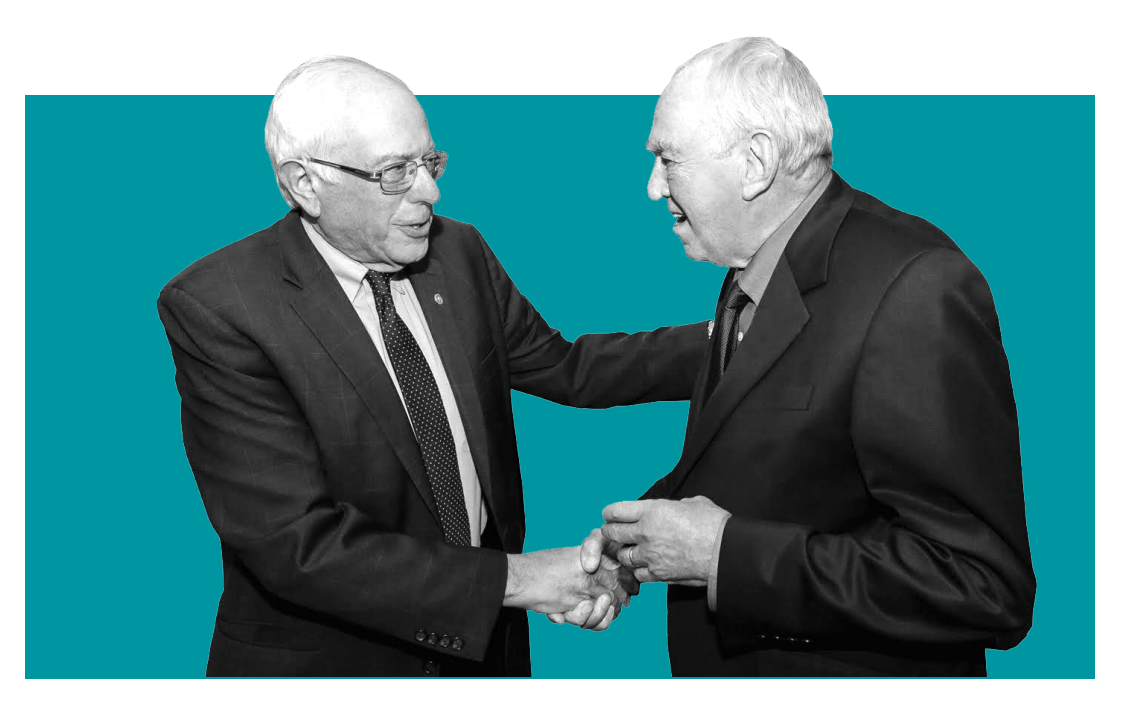 Early this year, we launched our Change the Game project to provide Canadians with more information about social democracy so that we can build a renewed path forward, together.  We want to provide the intellectual ammunition – social democratic policies – that progressives need to win the battle of ideas: ideas about tax reform, the environment, precarious work, debilitating inequality, and social harmony.

That’s why I’m inviting Canadians from across the country to join us in rethinking and renewing Canadian social democracy and to join our pan-Canadian campaign team of Game Changers this year by taking a pledge in support of this work.  Our Change the Game project takes a critical look at the history of social democracy in Canada, in order to learn both from the successes and challenges of the past and to educate Canadians on new approaches for a better future.

Social democracy transformed politics in the post-World War II era. We provided a political framework based on the belief that markets should be regulated and put in the service of social aims, and that high levels of social and economic rights like pensions, healthcare, and employment insurance should be available to all. These policies and programs lifted tens of millions in Europe and North America out of poverty.

It was our generation of social democrats, and that of our parents, that fought for such government investments in the common good, the protection not only of political and civil rights, but also of social, and economic rights – these were the original Game Changers. Thanks to successful struggles here in Canada, crucial social programs are now at the heart of our identity - Medicare, the Canada Pension Plan, and accessible post-secondary education. All of these had their origin in the egalitarian philosophy of social democracy.

The Broadbent Institute is committed to reinvigorating that fight for better social programs and greater social investments so that all Canadians can live in dignity.

As a lifelong social democrat, I am deeply troubled by rising inequality and the emergence of far-right political extremism today. I came of age believing that such things were relics of the past. Sadly, we are witnessing their growth once again.  As in the 1920s, economic insecurity and severe income inequality are sowing the seeds of division and resentment.

It’s our responsibility to stand up to the right-wing politicians. We must show Canadians that we can solve our social and economic problems, not by the politics of division and exclusion, but by banding together and taking on directly the cause of our political and economic inequalities.

That’s why I’m asking you again to join our Game Changers campaign - please take the Game Changers Pledge today and share it with your online community.

The energy we build from this project will be put to work specifically in our campaign to rethink and renew social democracy and in our advocacy work for innovative and expanded social programs.

As Bernie Sanders reminded all Canadians, we must stand up and fight for what we’ve achieved, and dare to fight for more. I hope you join our campaign today.

This year, let’s Change the Game for good!