Just when you thought things couldn’t get any slower, Ottawa has yet another rationale for delaying greenhouse gas (GHG) regulations for oil and gas companies. Worryingly, this one comes straight from the top.

In a year-end interview with Global News, Prime Minister Stephen Harper said that he hasn’t introduced regulations to curb GHG emissions from oil and gas production because he wants to move at the same pace as the United States.

In the prime minister’s words, oil and gas “is an integrated sector continentally …our government is certainly prepared to work with the United States on a regulatory regime that will bring our emissions down.  But I think this would be best done if we could do this in concert with our major trading partner, given as I say it is a seamless industry in North America. So that’s what I’m hoping we’ll be able to do over the next couple of years.”

Over the next couple of years?

The lack of federal GHG regulations on oil and gas is starting to feel like one of those sitcom plots where two characters clearly belong together but can’t ever seem to connect. As the seasons drag on, the reasons for the near misses become less and less convincing.

Harper’s government has considered a series of different policy options to curb oil and gas emissions since first taking office in 2006, but has yet to adopt any of them. (Stay tuned — maybe 2014 will be the year they’ll finally get together!)

There are many reasons why a G8 country shouldn’t outsource its climate policy, period.

The government’s most recent approach to oil and gas emissions — sector-specific regulations modelled on Alberta’s existing system — has been the subject of negotiations with industry players and the Alberta government since October 2011. The various proposals on the table have been examined in detail; the only missing ingredient is a political decision.

And now it sounds like our politicians (or at least the one who matters most) have decided to defer that decision indefinitely.

There are many reasons why a G8 country shouldn’t outsource its climate policy, period. But as we’ve described elsewhere, waiting on the U.S. is particularly inappropriate when it comes to Canada’s oil and gas sector.

That’s because, despite our linked economies, Canada and the U.S. have quite different emissions profiles. 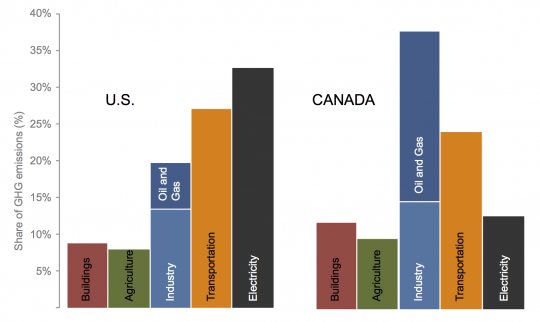 Oil and gas already accounts for 23 per cent of Canada’s emissions, and that share is projected to grow as oilsands production ramps up. Despite the recent growth in domestic U.S. production, oil and gas only makes up about six per cent of their emissions.

Because Canada decided to adopt the U.S. national climate target as our own, the two countries have the same goal for 2020.

In the U.S., power sector emissions — particularly from coal-fired electricity — are the biggest barrier to hitting the 2020 target. Power generation is also the largest sector yet to be regulated by the federal government. That’s why, in a landmark climate change speech in June, U.S. President Barack Obama committed to regulating new and existing facilities in that sector, and directed his Environmental Protection Agency to do so. According to recent government projections, the U.S. has a credible shot at achieving its 2020 goal once Obama’s climate plan goes into effect.

In Canada, oil and gas sector emissions — particularly from the oilsands — are the biggest barrier to hitting the 2020 target. Oil and gas is also the largest sector yet to be regulated by the federal government. Prime Minister Harper committed to adopt those regulations in his October 2013 throne speech, albeit without setting a deadline. Now he seems to be saying that Canada won’t go any further than that rhetorical commitment until the U.S. shows us the way.

In the absence of regulations to curb greenhouse gas pollution from the oil and gas sector, Canada is projected to miss its 2020 target by more than the total current emissions from passenger transportation in Canada.

Progress towards climate targets in the U.S. and Canada. Data sources: National Roundtable on the Environment and the Economy and U.S. Department of State.

While U.S. officials have taken some action to curb their oil and gas sector’s emissions, it could be years before the U.S. adopts comprehensive regulations for its new and existing oil and gas facilities. Canada’s oil and gas industry has definitelynoticed the leisurely timeline for oil and gas sector regulations south of the border, arguing that it’s a risk to Canada’s competitiveness to move faster than their U.S. peers.

I wish the U.S. were doing more on oil and gas: climate change is a huge challenge, and all sectors will need to do their part. But at least the U.S. has identified the most critical area needing improvement and committed to reduce those emissions.

In Canada, it’s oil and gas emissions that will make or break our 2020 target. The oilsands is our fastest-growing source of GHG emissions today, and the sector hopes to nearly double its production in the decade ahead.

The U.S. doesn’t have an oilsands sector. So no matter how hard its Environmental Protection Agency works, it’s never going to write emission regulations for oilsands.

In other words, curbing greenhouse gas emissions from the oilsands is a uniquely Canadian responsibility.

As we start a new year, I wish I could say that our federal government was trying to fulfill that responsibility. Instead, Ottawa seems to prefer the “I thought we were on a break!” approach to producing GHG regulations.

That didn’t work out very well for Ross on Friends, and it’s not working well now for Canadians or our oil and gas sector. Let’s hope Stephen Harper doesn’t plan to keep us guessing until the season finale.

This article originally appeared on the Pembina Institute's blog and is republished with permission.