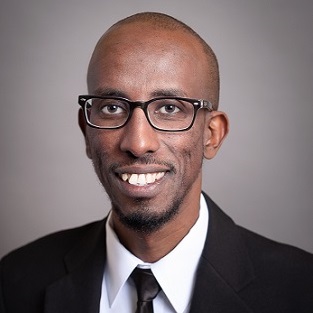 Sharmarke Dubow is a Somali Canadian politician and human rights advocate. He cast his first vote ever in an election on October 20, 2018 and was elected a City Councillor in Victoria, BC — the first Black City Councillor to be elected in Victoria in 152 years.

In his first term on City Council, Sharmarke has already made many important contributions. He’s passed motions to make public transit free, started a renters advisory committee to give tenants a voice, has worked to bring an equity lens to decision-making at the City level and fought for the addition of affordable housing in Victoria. He is working hard with other progressive councillors to build a more affordable, inclusive and thriving city.

Sharmarke sits on various regional service and civic committees, including the Victoria regional transit commission. Outside of his city duties, he is a board member of the Victoria Coalition for Survivors of Torture and the Vancouver Island Human Rights Coalition. He is a long time former board member of the Canadian Council for Refugees and has previously worked at both the Inter-Cultural Association of Greater Victoria and the Victoria Immigrant Refugee Services Centre.

Sharmarke believes strongly that policy makers and decisions makers should reflect the communities they serve. He mentors young Indigenous and racialized immigrant and refugee leaders as a faculty member through the Vancouver Foundation's LEVEL youth engagement initiative that seeks to strengthen environments where Indigenous and racialized youth can thrive and create more inclusive spaces for other youth.

Sharmarke holds a BA in Business Technology from the University of Cape Breton and has a background working in refugee issues, youth engagement, community development and governance. He immigrated to Canada in 2012 and settled in Victoria. Before this, he worked in Egypt with AMERA International, formerly AMERA UK, or Africa and Middle East Refugee Assistance, The Psycho-Social Services and Training Institute in Cairo including the Center for Migration and Refugee Studies (CMRS) at the American University in Cairo (AUC).

For 20+ years, Sharmarke was a refugee himself living with great uncertainty and he brings this perspective to all of his work with the city and the wider community. Sharmarke imagines an economy where no one is left behind and where working people are treated with dignity in the workplace and are paid well. He continues to fight for policies that put people first before profits.