The recent election was full of varying promises to increase growth rates and employment levels. Few of these promises, however, addressed a critical weakness in our ability to compete in global markets: significant literacy and numeracy skill shortages.

This is a critical area where the federal government has a vital role to play.

Literacy is defined as the knowledge and skills needed to understand and use information from text from a broad range of documents. This definition of literacy goes beyond the act of reading to include the application of what is learned to solve problems and reach conclusions based on evidence. Internationally, literacy is measured on a 500 point scale and divided into 5 proficiency levels. The threshold between Level 2 and 3 is a critical one, as it reflects where cognitive processing moves from the recall processes at the back of the brain to the reasoning processes in the pre-frontal cortex. As illustrated below, Level 3 allows workers to analyze and evaluate. 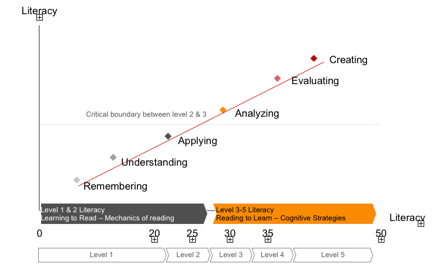 Consider that 40% of all workers in Canada have literacy skills below the level demanded by their occupation. This skill shortage makes them less productive and less safe than they might otherwise be. The problem is not about not being able to read. All but 15% of these workers have mastered the act of reading, a skill that allows them to apply routine procedural knowledge. What these workers can not do is read well enough to be efficient problem solvers and to apply their technical skill and knowledge in non-routine ways.

This would not be a problem were it not for the fact that the global supply of workers with the appropriate skill set – technical skills and the literacy skills needed to apply them - is growing exponentially. The fact that these foreign workers can use the same production technologies, the same raw materials and production processes but earn less than equally qualified Canadian workers opens a huge productivity gap that can only be closed in two ways: drop Canadian wage and benefit rates to match those of our foreign competitors; or find a way to increase the supply of Canadian workers with advanced literacy skills.

Clearly, the latter strategy is the only real option.

It is critical to confront what will happen to the Canadian economy and society if governments fail to act on these skill shortages. Jobs demanding the routine application of procedural knowledge and Level 2 literacy skill will continue to move offshore to equally skilled but cheaper markets. Employment levels, wage levels, benefit levels and tax revenue will fall. The level of wage and income inequality will rise sharply as high skilled individuals capture the benefits of their higher productivity in the knowledge economy.

Canada’s economic prospects will not depend on more post-secondary graduates, more PhD’s, entrepreneurship, innovation or any number of other 21st century skills. What will make the difference is higher proportions of the workforce with the ability to problem solve, draw conclusions based on evidence and think critically – skills that depend on Level 3 or better literacy and numeracy skills.

So the key question for politicians is how might we increase the supply of adults with advanced literacy skills. The answer to this question is not as simple as one might think. Our research identifies the need for four sets of measures.

First, we need to increase the proportion of youth leaving the secondary system with skills at or above Level 3 on the international skill scale. Currently, 30% of students leave the secondary system with literacy skills below this level. This is not really about money – we already spend more on K-12 education that most of our competitors. What primary and secondary teachers lack are the tools, information and incentives needed to identify and help struggling students at the point when they start to fall behind.

Just to be clear, this is not about implementing system-wide testing regimes for reading but rather individual diagnostic testing and subsequent remediation. All that is needed is the political will to make it happen.

Second, post-secondary institutions need to be forced to assess the literacy and numeracy skill of students entering their programs, offering them literacy and numeracy skill upgrading if needed, and testing them at the point of graduation to ensure that they have the minimum skill level to work in their target occupation. Fully 85% of any given cohort of youth goes on to some form of post-secondary education, so the proportion of learners with literacy skills below Level 3 in some programs is as high as 60%.

These students simply do not have the reading skills needed to take full advantage of the opportunity. They learn less, are much more likely to drop out before graduating and provide neither the taxpayer nor the learner with the expected lifetime return on what by any measure is a significant investment of time and money.

Over the long term, these two strategies could solve Canada’s literacy skill shortage. Unfortunately, the education system will not be able to improve the literacy skill level of their graduates rapidly enough to have a material impact on Canada’s aggregate literacy skill supply. This will provide our foreign competitors with an advantage over the coming decade.

Research suggests that such investments make business sense because they would more than pay for themselves - through increased productivity, reduced employee turnover and increased customer satisfaction - in the first year.

The challenge is, how do we convince employers to invest in remedial skill upgrading for their workers? Such investments are simply not in their culture. Employers are accustomed to the governments meeting their skill needs and have been lulled into complacency by a 60-year labour and skill surplus. Unfortunately, times have changed and the literacy and numeracy skill shortage is pressing.

Given the prospect of strong positive returns, the simplest way to eliminate literacy skill shortages is for the federal government to cover the entire cost of the needed investment. Provincial governments and employers might be asked to pick up part of the cost.

Governments at all levels would realize significant benefits from such an investment. For example, higher tax revenue, reduced income support payments on EI, Social Assistance and Workers Compensation  (totalling $2.119 billion billion per year) and health expenditures ($688 million per year) - in addition to the significant multi-year increase in total factor productivity. Although the required government investment is large, the projected returns are, by almost any standard over 1300% over 5 years.

The case for government investment rests on two critical and strong assumptions: that educators can realize the required level of literacy skill gain and that employers will put the additional skill to productive use.

Recent research suggests that the quality of instruction offered by Canada’s literacy upgraders is highly variable, with institutions able to realize only 70% of the expected skill gain. Doing better will take better curriculum, better trained instructors and funding models that reward success and punish poor performers. Governments need to fund the needed upgrade to the system itself.

Recent research also suggests that employers are unlikely to absorb all of the new literacy skill, at least over the short run. Currently, 30% of the adult work force have literacy skills above the level demanded by their occupations. The available data suggests that these workers are losing a significant amount of their surplus skill through a lack of use. The literacy skill being lost cost a lot to create and represents a significant amount of lost economic potential - $6.109 billion per year in lost earnings by our estimates. Under these circumstances, it is also highly unlikely that employers would invest in literacy skill upgrading.

Even 80% training subsidies, according to new unpublished research, may not be enough to induce employers to invest. The only way to reduce literacy skill loss is for employers to increase the knowledge and skill intensity of their production processes.

Paradoxically, employers may be slow to make the necessary adjustments as they have, over the past 60 years, systematically reduced the skill intensity of their production processes to cope with the fact that large proportions of workers have lower levels of literacy skill than needed to compete in global markets. There is a need for governments to create incentives for firms to become more knowledge and skill intense. Reductions in the relative tax rates for wages and benefits would likely do the trick.

There is an urgent need for governments to invest in creating new literacy supply both by improving the quality of key flows and by upgrading the skills of 40% of the stock. To accomplish this the government will need to invest in improving the quantity and quality of instruction. Ironically, governments also need to intervene on the demand side by creating incentives for employer to increase the knowledge and skill intensity of their jobs so that any new skill supply gets taken up and put to productive use.

Should they do these things, Canada will be wealthier, healthier and more equitable.

Scott Murray is President, DataAngel Policy Research Incorporated. You can reach him at: dataangel [at] mac.com