Wettlaufer, Lou Schizas, and the myth of post-feminism

Yesterday, Toronto Star journalist Ashley Csanady reacted on Twitter to a controversial U.K. study that found that women around the world, including Canada, are less knowledgeable about current affairs and politics than men are: 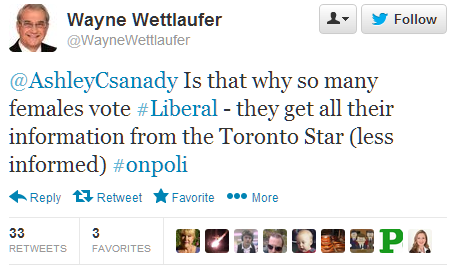 Setting aside the questionable merits of the study’s findings, Wettlaufer's comment was roundly criticized, just as radio commentator Lou Schizas was a month ago when he referred to Ontario NDP leader Andrea Horwath as a "whore".

Unfortunately, it's too easy to pass Wettlaufer's remark off as little more than a hasty effort to score political points, one that betrayed his apparent sexism. Because what's more off-putting about his comment is how comfortably it fits within a sort of 'post-feminism' consensus now pervasive in conservative politics in Canada.

Conservatives seem to operate as though we have reached an acceptable level of equality between men and women (to say nothing of those who self-identify otherwise). They govern as though systemic discrimination is a thing of the past, as though the feminist movement had its time and place and we can all move on now, together, largely free of any lingering male chauvinism.

The record of the federal Conservatives on women's issues speaks volumes. Mr. Harper's government has done next to nothing to combat Canada's considerable gender gap, including continued pay inequity (according to the Conference Board of Canada, the 19% gap in income between men and women in Canada).

His government continues to ignore calls for a national commission of inquiry into missing Aboriginal women. And despite persistent and serious domestic violence facing all Canadian women, Harper's budget cuts have disproportionately targeted women's rights and women's advocacy groups including the National Action Committee on the Status of Women, National Association of Women and the Law, the Canadian Research Institute for the Advancement of Women, the Centre for Equality Rights in Accommodation, Planned Parenthood Federation, KAIROS, and the Ontario Association of Interval and Transition Houses among others.

This is not the kind of track record that will appeal to Canadians: women, Toronto Star readers, or voters in general.

It's true that the situation in Canada today does not compare to the constant attack on women and the seemingly limitless attempts to regulate their bodies unfolding in United States. But for Canadian progressives, the considerable and laudable progress that has been made towards equality here is not enough.

The struggle very much continues and the Broadbent Institute intends to be vocal in taking both blatant sexism and the conservative movement's comfort with a faux equality status quo, to task.