Cost of home today is double the amount in weeks of labour time compared to 1970s: new study

Inequality is a major theme of current research in economics throughout the world. The now-famous Capital by Thomas Piketty released in English in 2014 is a case in point. It is also a major focal point in Canada, as illustrated by the book Income Inequality: The Canadian Story published recently by the Institute for Research on Public Policy and in the ongoing work of the Broadbent Institute and other groups.

One area of interest in this field is whether it costs more to purchase an average residential property now than it did in the past. In other words, are residential properties becoming less affordable over time, and as a result less accessible or plausible for those with lower or median incomes?

Obviously, the nominal dollar cost of a house or a condo today is much higher than it was 10 or 20 years ago. Indeed, it is even higher than what it was just a couple of years ago. There exists a number of indices that look at the price of housing by deflating the nominal dollar price of a house by the consumer price index (CPI) to get an idea of how fast housing prices are rising relative to the general rise in prices of consumer goods.

I want to do something different. I want to calculate how many weeks of labour time, paid at the Canadian average weekly rate, it takes to purchase an average residential property. 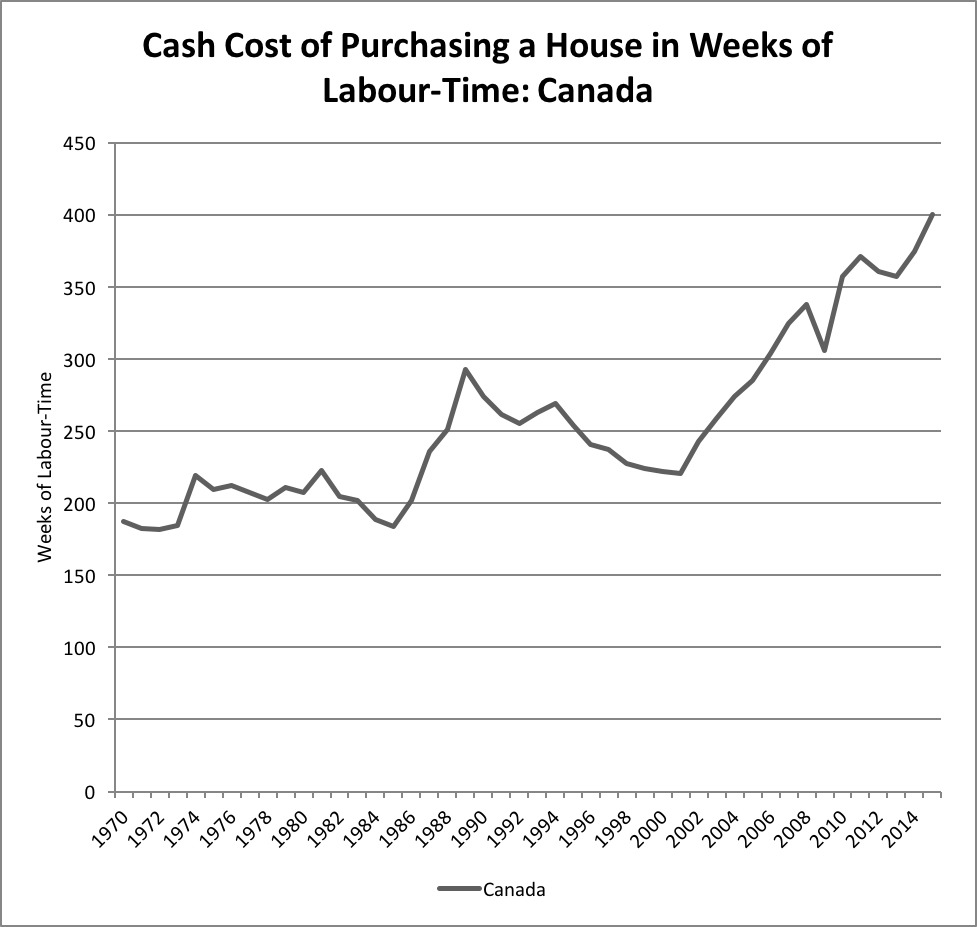 The figure shows clearly that the cash cost of a residential property in terms of weeks of labour time remained roughly constant all the way from 1970 to 1986, at which point housing prices in Canada (and in particular in the Toronto area) rose drastically during the next three years.

This boom in real estate prices, the rise in CPI inflation, as well as the desire of our monetary authorities to achieve price stability and impose inflation targeting, eventually led to the brisk intervention of the Bank of Canada. The Bank decided to double short-term interest rates from seven to nearly 14 per cent in the late 1980s, thus inducing our longest economic recession ever between 1990 and 1992.

On the housing front, one could say that the Bank’s interest rate policy was highly successful. The cash cost of a residential property in terms of weeks of labour dropped and did not catch up with the peak reached in 1989 until 2006. Thus while in 1984 it only took 184 weeks of labour time at the average weekly wage to purchase an average Canadian house (the same as it did in 1971), at the 1989 peak, 293 weeks were required.

Since 2001, except for the downward blip in 2009 associated with the subprime financial crisis in the United States, housing prices in Canada in terms of weeks of labour have increased at a fast pace.

In 2015, the cash cost of a residential property is double the amount of weeks of labour time that was required during the whole of the 1970s: no less than 400 weeks of labour is now needed to buy the average Canadian house. This is nearly 8 years worth of labour time and about an extra 100 weeks compared to the 1989 peak.

Clearly, at cash cost, young Canadians who wish to own their dwelling are much worse off than were their parents when they bought their house in the 1970s or during the first half of the 1980s.

Unless they inherit from their parents, most people are unable to purchase their dwelling with a cash payment. What is more interesting is to assess how much it costs Canadians (again, in terms of weeks of labour time) to purchase the average residential property when these individuals finance their purchase through a mortgage.

This is what Figure 2 shows: 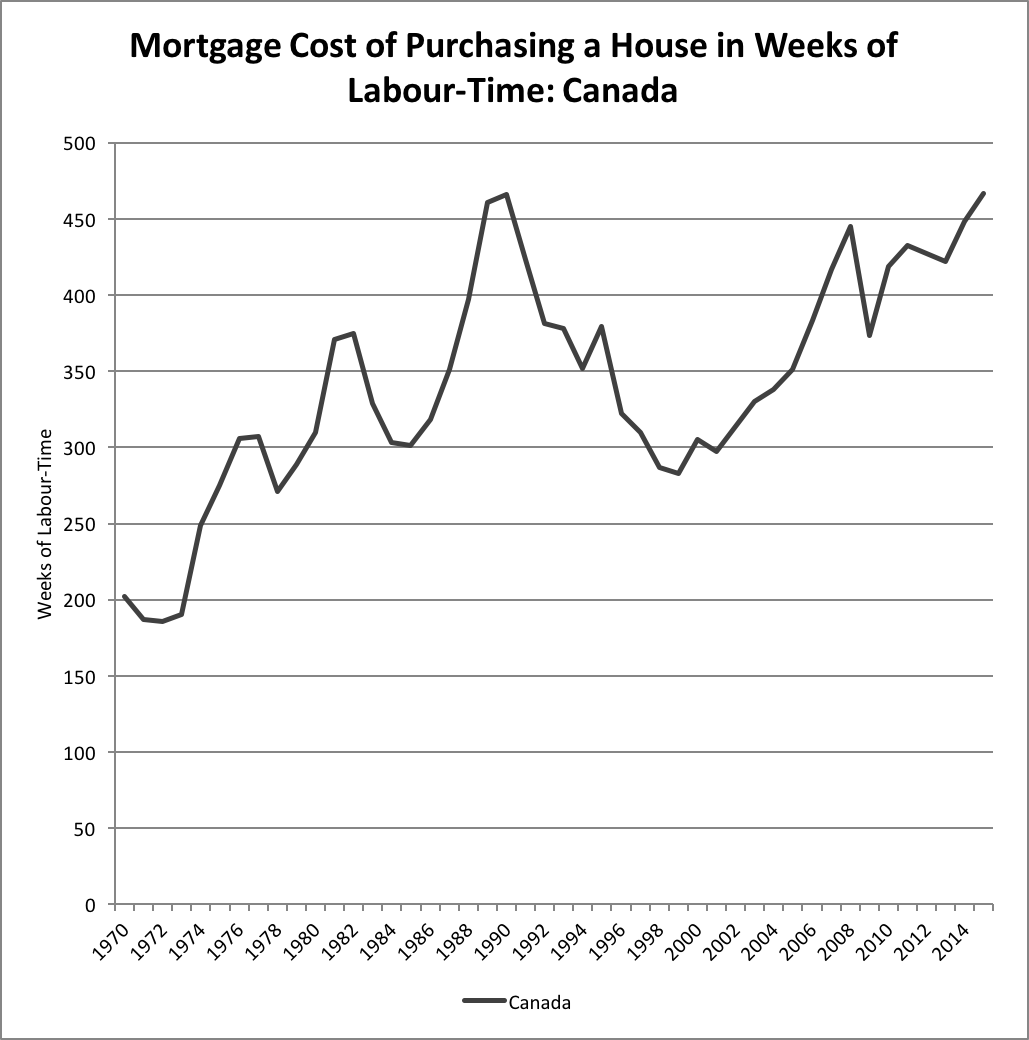 For ease of computation, the numbers are based on some simplifications and assumptions.

I assume, for example, that the whole value of the dwelling is financed through a series of three five-year fixed mortgages, amortized over 15 years. Of course, since we don’t know what interest rates and wage rates will be after 2016, the numbers for the years after 2011 are estimates based on an extrapolation of recent numbers for these two variables (with a return towards trend values in the case of interest rates).

The picture that emerges from Figure 2 when interest payments are taken into account is substantially different from that of Figure 1 where a cash payment was assumed.  The high nominal and real interest rates that were imposed by the Bank of Canada as part of its anti-inflation policies in the early 1980s and just before and after 1990 took a hard toll on individuals or their families desiring to purchase a residential property. Those who bought an average property in 1981 and 1982 (under these assumptions) needed 351 and 375 weeks of labour time to finance their home.

This compares poorly with the 186 weeks that were required for a purchaser in 1972. Similarly, throughout the 1987-1995 period, purchasers required more than 350 weeks of labour to finance their mortgage on an average Canadian home.

The peak was reached for 1990 buyers, who needed no less than 466 weeks of labour time to make all of their mortgage payments. Things improved after that, as the mortgage cost of purchasing of a residential property gradually fell all the way to 297 weeks in 2001, mainly as a result of stagnating nominal housing prices during that time period. However, ever since 2001, the mortgage cost of residential properties has been on an upward trend, with the exception of the 2009 downward blip.

Since 2007 (with the exception of 2009), purchasers of residential properties again necessitate more than 400 weeks (or eight years) of labour time to make all their mortgage payments. Looking at 2011, which is the last year based on hard numbers, 432 weeks are needed. Just as it was in the case of the cash cost of a residential property, this represents twice as many weeks of labour time needed to finance a mortgage as compared to the early 1970s.

Lack of fairness in mortgages

The impact of mortgage interest rates can be further assessed by Figure 3, which measures the evolution of the mortgage to cash cost ratio of purchasing a residential property in terms of labour time.

Take, for instance the scenario of someone buying a house in 1986; the mortgage rate in 1986 obviously has an enormous impact on this ratio, but since the mortgage, under the assumptions outlined earlier, need to be renewed in 1991 and 1996, the mortgage rates in these two years of renewal will also play a role.

Figure 3 clearly shows that the cost of buying a house through a 15-year mortgage, except for brief periods, has been systematically higher by 20 to 80 per cent than buying the same house at a cash price. Indeed, between all of the 1980 to 1992 period, the excess is 50 per cent or over. 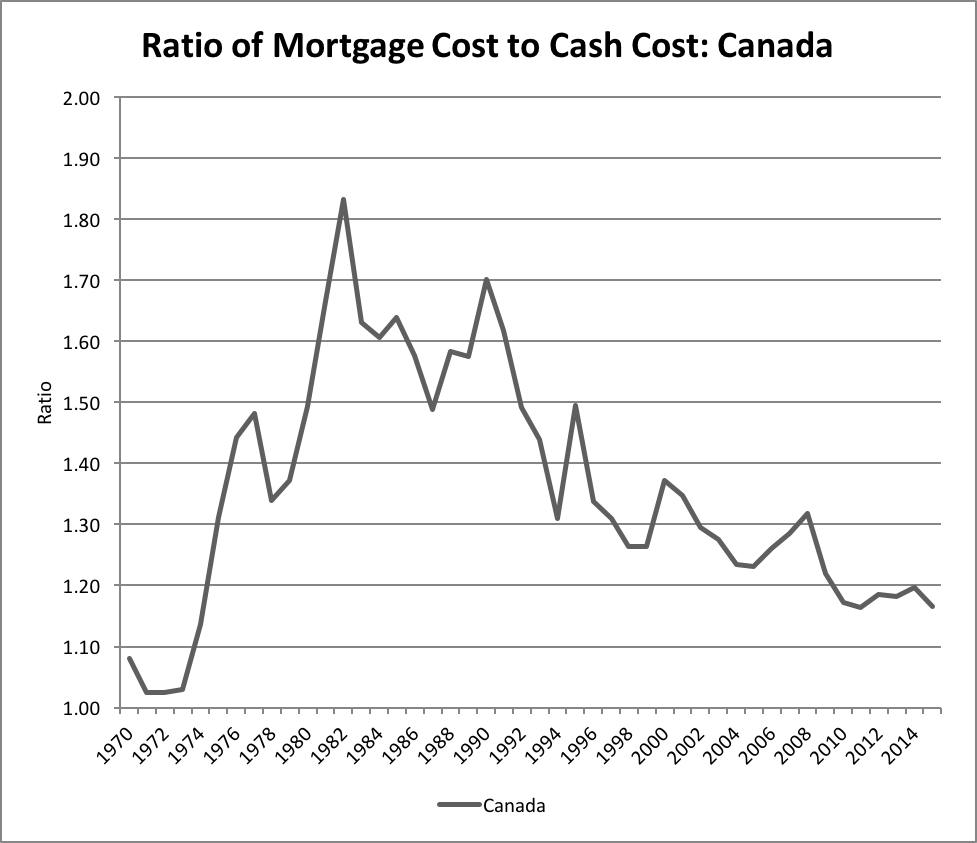 In a fair world, one would expect the cash cost and the mortgage cost in terms of weeks of labour time to be the same and hence the ratio described in Figure 3 to be equal to unity. This, however, happens only in the early 1970s, although there is a tendency to get back there in the 2010s.

The reason fairness would require that this ratio be equal to one is that, as argued by the Italian economist Luigi Pasinetti in his 1981 book, Structural Change and Economic Growth: A Theoretical Essay on the Dynamics of the Wealth of Nations, a fair interest rate is such that the purchasing power of one hour of labour stays constant through time even when its monetary equivalent is lent or borrowed. This occurs when the nominal interest rate is equal to the growth rate of nominal wages.

A numerical example may help to grasp the notion of the fair rate of interest.

Suppose that the average wage is initially $20 an hour. Suppose furthermore that a borrower contracts a $20,000 loan. This person has thus borrowed the equivalent of 1,000 hours of labour-time. Suppose now that nominal wages have risen by 5 per cent, reaching $21 per hour a year later. If the rate of interest charged to the borrower is also 5 per cent, the borrower will have to reimburse an amount of $21,000 at the end of one year. Since the average nominal wage rate has now risen to $21 an hour, the amount given back by the borrower is still equivalent to 1,000 hours of labour-time. As long as the actual rate of interest is equal to the fair rate of interest, as defined above, the purchasing power that is being temporarily exchanged between the borrower and the lender remains constant in labour time. This is how Pasinetti interprets fairness, and this is why, nearly 30 years ago, my colleague Mario Seccareccia and I dubbed this the fair rate of interest.

Thus a fair mortgage rate is such that the cash cost and the mortgage cost of purchasing a house is the same in terms of weeks of labour time. Five-year mortgage rates are currently very low by all historical standards, but they are still relatively high when put in perspective with the growth rate of nominal wages.

In addition, these low mortgage rates certainly do not compensate enough, as obvious from Figure 2, for the high cash cost of purchasing a dwelling in Canada today. Pro-growth fiscal policies that could eventually lead to faster growth in wages, without interest rate increases, would further help in bringing mortgage costs towards cash costs. This is not unthinkable today as central bankers acknowledge the long-term negative consequences that their short-term inflation targeting policies may inflict.

The data here demonstrate that the cash cost of the average residential property in Canada is much higher today than through most of the last five decades.

This conclusion could be challenged by some observers by arguing that most of the cost increase in residential units could be attributed to the desire of households to acquire ever bigger houses. For instance, newly-built houses in 1975 had on average 1075 square feet; in 2013 they had about 2000 square feet. Therefore, whether current households suffer from inter-generational inequity depends on whether one believes that the average size of houses is a free individual choice or, at least to some extent, is being imposed by the construction industry and society more generally.

Swings in the monetary policies pursued by the Bank of Canada have obvious consequences on housing prices and interest payments on housing mortgages. These swings help create enormous inter-temporal inequities. The amount of financial resources devoted to housing ownership across households of different generations, sometimes apart by less than a decade, can diverge by more than 100 weeks of labour time.

Of course monetary policy is not the sole cause of the fluctuating nominal housing prices. Whatever is the current cause of the rise of prices in the housing market, when computed as the mortgage cost in labour time in terms of the average weekly salary, residential properties, with the exception of the 1988-1991 period, are now clearly less affordable for middle-class Canadians than they were for the last five decades.

This affordability challenge has grown for nearly a decade. Current and recent buyers need to devote many more weeks of labour time to the financing of their home than their predecessors. No wonder so many young prospective buyers, especially those in major cities, feel that owning a residential unit is more like a long-distance dream.

Marc Lavoie is Professor in the Department of Economics at the University of Ottawa and Broadbent Institute policy fellow. This research was financed by a grant that Mario Seccareccia and I obtained from the Institute for New Economic Thinking (INET). Many thanks to our hard-working research assistants Najib Khan and Drew Penner, as well as to Jonathan Sas for his many suggestions.