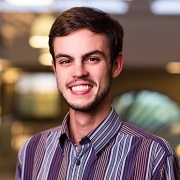 Nate Little brings political campaign experience and a passion for social democracy to his position of Development Assistant at the Broadbent Institute. He holds a BA from King’s University College at Western University where he double-majored in Social Justice & Peace Studies and Philosophy and went on to earn an MA in Philosophy from Memorial University of Newfoundland. During his time in university, he was heavily involved in student politics, including a year as the King’s University College Students’ Council President. His academic research focused on political philosophy, political theory, and its practical implementation, which culminated in his Master’s thesis which argued a democratic justification for a basic income.