Prime Minister Stephen Harper is doubling down on his strong commitment to oil sands development, charging that the opposition's call for greenhouse gas reductions and a thorough environmental review process of pipeline and new energy projects would be an economic disaster.

This approach is wrong on at least three grounds.

First, the rhetoric of Harper in full election mode is at odds with the fact that Canada has just made a formal commitment in the run up to the upcoming United Nations Framework on Climate Change Conference of the Parties in Paris to reduce Canada's greenhouse gas (GHG) emissions by 30% from 2005 levels over the next 15 years.

This is, according to the government, equivalent to a 50% reduction by 2030 compared to forecast total emissions under business as usual policies.

If Canada's international commitment has any meaning at all, it must be translated into an ambitious economic plan. Experts agree this will have to include strong measures to reduce greenhouse emissions by the oil and gas industry which are still growing rapidly.

Until recently, even the Harper government had recognized this reality in its promise to set emissions standards for the oil and gas industry, a measure which Harper has now dismissed as “crazy economic policy.”

The Intergovernmental Panel on Climate Change has indeed said that the world has a carbon budget of about one trillion tonnes which cannot be exceeded if we are to avoid catastrophic global warming, defined as a 2 degree global temperature rise compared to pre industrial levels. That budget will be exceeded by 2045 under business as usual policies.

But roughly one half of that total carbon budget is still available for use. A new and effective global climate agreement to avoid hitting the 2 degree increase would mandate a large, phased in shift away from carbon fuels through greater energy efficiency, and a major transition to renewable sources of energy. But there would still be a role for carbon fuels in the transition.

Here in Canada, a 2009 study (funded by the TD bank) by Mark Jaccard and Associates for the Pembina Institute modelled the economic and emissions impacts of a comprehensive set of policies as part of a global effort to avoid the catastrophic two degree temperature rise. The package included putting a high and rising price on carbon, tough energy efficiency regulations for buildings and cars, and major public investments in transit and in the electricity grid so as to transition away from power generation from coal and natural gas.

The key finding of the study was that there would be no overall impact on job growth or the overall economic welfare of Canadians. While growth would be slightly lower in Alberta than under a business as usual scenario due to a reduction in the rate of growth of the oil and gas industry, petroleum extraction output would actually continue to grow before tapering off. 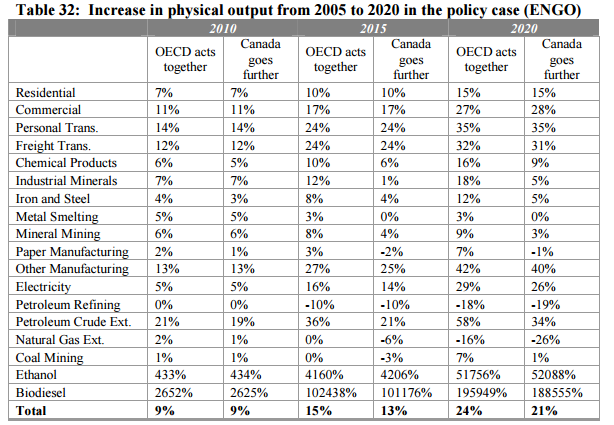 The third reason why Harper is wrong is that he ignores the gains of shifting away from a carbon intensive model of economic development. The Jaccard report shows no net negative impact on jobs since there would be large job gains from public and private investments to greatly improve energy efficiency and to build up the renewable energy industry.

A recent report from Analytica Advisers shows that clean technology industries now account for 50,000 jobs in Canada and $12 billion in exports,. However, we are badly losing out in the fast growing global market for clean technology. Our global market share is just 1.3% and falling and we rank just nineteenth in the world, behind even Malaysia, Denmark, the Czech republic and tiny Singapore.

The truly “crazy economic policy” for Canada would be to double down on fossil fuel led development at a time when the world is finally starting to take seriously the need to deal with climate change, and at a time when the downside of our over reliance on crude resource extraction  is becoming ever more apparent.

There is a role for the oil and gas industry in Canada's economic future. But a comprehensive plan for environmentally sustainable development must give priority to the needed transition to a post carbon world.