Fundamentally, housing is for people. The Ontario government appears to ignore that aspect, even by the 2021 Ontario Housing Affordability Task Force’s developer-focused recommendations.

Amid relentlessly increasing home buying and rental prices, the Doug Ford government established the Task Force which has produced a report yielding 55 recommendations to address the housing crisis with the key objective of keeping up with the demand for housing in Ontario. Specifically, the report recommended increasing the rate of housing construction to build approximately 1.5 million homes across the province over the next ten years.

While the Task Force accurately notes over the previous decade in Ontario the immense increase in home prices (180%) compared to the modest increase in wages (38%), the report specifies that housing affordability is not the focus of the Task Force’s mandate. Instead, the Task Force was tasked to make recommendations for, “closing the housing supply gap to improve housing affordability,” conditional on what some argue is an unreliable connection between supply and profits. This favoured approach is “hands-off” by the Ontario government, leaving the for-profit market to fill in the gaps that will somehow lead to housing affordability through supply. The report recommends reducing or eliminating the public consultation process and municipal influence from housing development and planning, and instead to give the private sphere free-reign over home building.

This approach neglects how housing was rapidly created in the past. Until recent decades, multiple levels of government have been involved in creating housing for Ontarians.

Between 1947 and 1985, 25 percent to 55 percent (30,000-125,000 units) of housing developed in Canada annually relied on some involvement from the government. When considering the Ontario government’s celebratory tone around an estimated figure of 100,000 housing starts in 2021 led by for-profit developers, one has to question whether any of these new builds can be considered affordable for middle- or low-income households.

Relinquished leadership by governments is heavily implicated in the lack of affordable housing in Ontario. In 1993, the federal government ceased funding social housing, as various responsibilities were downloaded to the provinces during this era. In 1995, the Mike Harris government cancelled the provincial housing program. These actions resulted in nearly zero non-profit housing being developed in Ontario until 2000.

Adding fuel to the housing affordability fire, in 2001 the province devolved the responsibilities of funding and administration of most non-profit housing to municipalities. Today, Ontario is pushing for further profits for the home building industry. The 2021 Task Force recommends further limits on municipalities regarding real estate developments, despite their great responsibility over non-profit housing.

Meagre public investments and the withdrawal of government non-profit housing development has intensified housing supply shortfalls and increases in prices. Instead of public investment in affordable housing, the Ontario government is looking to lower political barriers for for-profit construction companies to build high-density housing, with the notion that increased supply will lead to affordability. The Task Force’s report notes, 70% of the City of Toronto’s land is zoned for single-family homes and proposals to build high-density types of  housing are often met with costly application and public consultation processes. Many of the Task Force’s recommendations do enable a smoother process for building density, but at the expense of democratic inputs and affordability guarantees that instead enable profiteering.

By bypassing city administrations, and even neighbourhood input, to allow for-profit developers free rein over the most profitable mode of building more housing supply, Ontario municipalities become vulnerable to exploitation by developers. Removing these protections against profiteering, while neglecting the non-market housing sector, evokes much of the failures of “urban renewal” policies throughout the 20th century that left many cities sprawling, expensive, and underserved by services and infrastructure by the 1990s.

While a standard definition of affordability does not yet exist, other definitions and statistics can help to determine what can be considered affordable. According to the latest Canadian Income Survey, Ontario’s median, unattached individual after-tax income is $35,100 annually and the median household after-tax income is about $70,100 annually. The Canada Mortgage and Housing Corporation considers a home affordable for a household if it costs less than 30% of a household’s total gross income. For the median unattached individual Ontarian an affordable rent is considered to be $878, for a household which averages about 2.6 people the cost would be $1753. These figures must be used as a base when creating affordable housing for Ontarians, though housing prices today far outpace these calculations. 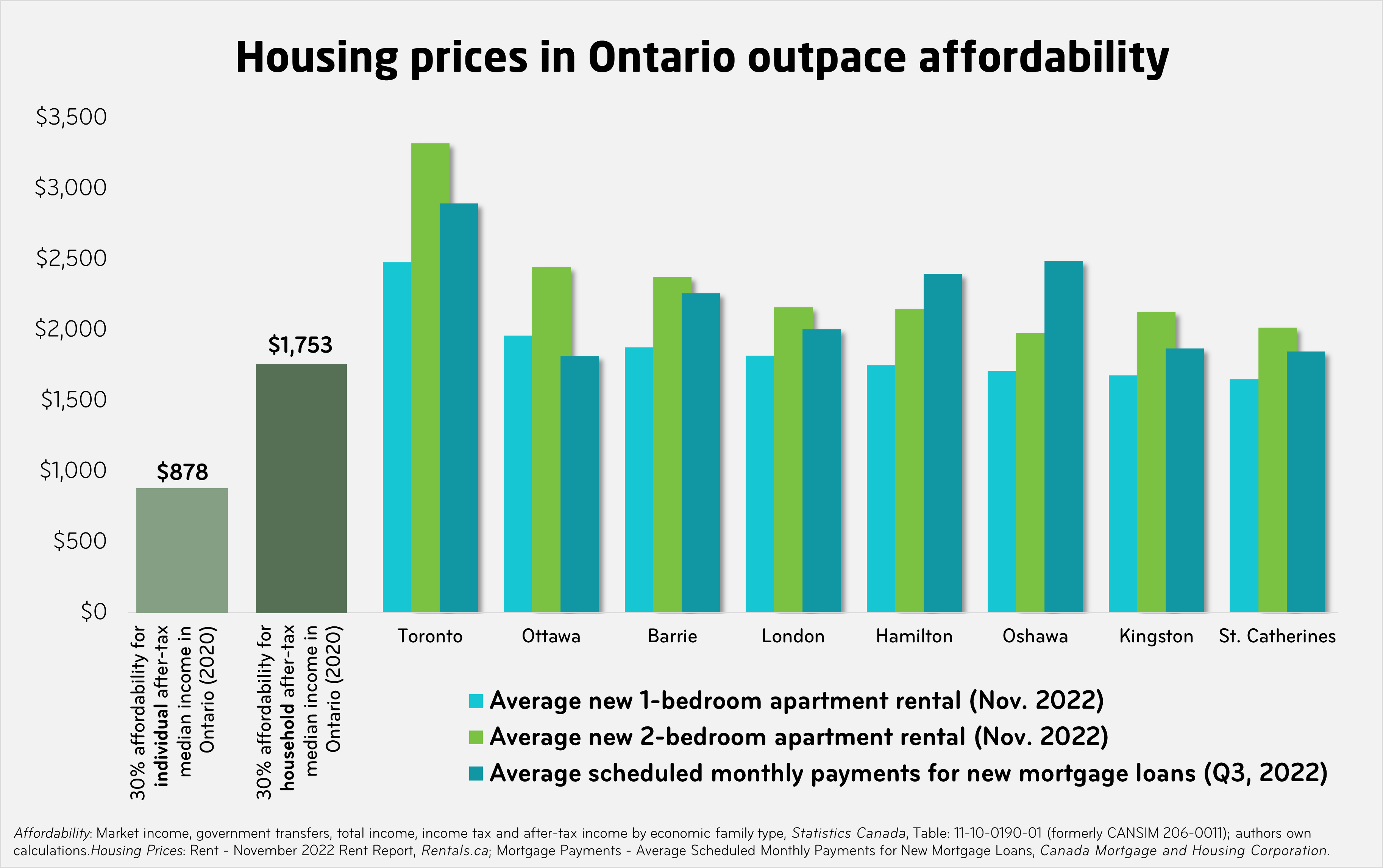 These affordability considerations are certainly not reflected in increases to housing supply. From 2011 to 2016, a study finds that the City of Toronto gained 258,274 apartment units, while at the same time losing 121,860 units priced at under $1000 per month. The efficient and cost-effective way to ensure housing access is to preserve existing housing. The study suggests the development of new housing can cost up to 40% more than retaining currently affordable housing if the objective is to make housing a human right.

There are alternative policies not considered by the Task Force that should help to make housing truly affordable. A very simple policy tool often suggested is forbidding the practice of “renovictions” (evicting a tenant for the purpose of renovation). Mention of this common practice is absent from the Task Force report. The implementation of strict rent control policies such as forbidding large increases between tenants would also aid in keeping affordable rental housing on the market, though this policy tool is also curiously missing from the Task Force’s recommendations.

Furthermore, by eliminating a negotiation-based approach to development, in tandem with removing zoning regulations, the Task Force missed opportunities to introduce collaboration between municipalities and developers. Building mechanisms where developers and city administrations work together to find common ground on building heights and density could have incentivized the creation of affordability requirements, public spaces, and other community benefits.

Ontario’s approach to the housing crisis appears to be quite blunt in favour of developers and their market-based approach. It is questionable whether housing affordability can truly come about when the goal of constructing over 100,000 homes annually in Ontario will not be built with affordability in mind. Without considering a comprehensive policy toolkit geared to affordability, we would only be adding homes that are still out of reach.

James Powell is an urbanism and policy researcher based in Montréal, provoking critical thought regarding the issues facing Canadians and persons across the world.