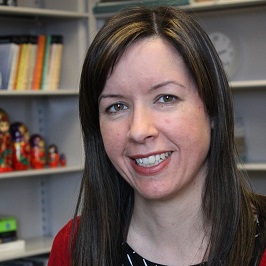 Rhonda L. Hinther is an Associate Professor of History at Brandon University (BU) and an active public historian.  She holds a PhD in History from McMaster University.  Hinther’s research interests include oral history, gender and women’s history, migration history, internment history, and the history of radical activism in Canada. Her work has been published in Manitoba History, Atlantis, and Labour/le travail.  Her article, “Raised in the Spirit of the Class Struggle:  Children, Youth, and the Interwar Ukrainian Left in Canada” (Labour/le travail, 2007) won the Canadian Historical Association’s (CHA) Neil Sutherland Prize.

Hinther is co-editor of Re-imagining Ukrainian-Canadians:  History, Politics, and Identity (University of Toronto Press, 2011).  She is presently co-editing a book on the history of internment in Canada, based on papers given at 2015 SSHRC-funded conference she co-organized.

Prior to joining BU, Hinther served as Director of Research and Curation at the Canadian Museum for Human Rights (CMHR) and, before that, as Curator of Western Canadian History at the Canadian Museum of Civilization (CMC) in Gatineau, Quebec.  She has curated numerous museum exhibitions and has consulted on and appeared in several historical films.  The documentary “The Oldest Profession in Winnipeg:  the ‘Red Light District of 1909-1912,” based on her research, won the 2012 CHA Public History Prize.  She is presently collaborating on a virtual reality project recreating life in a Brandon, Manitoba WWI-era internment camp. Hinther is a member of the organizing committee for the Winnipeg General Strike Centenary conference, which will take place in May of 2019.