Seven progressive changes coming to BC

On June 22, the BC Legislature reconvened and Premier Christy Clark tabled a curious Throne Speech which bore little resemblance to the platform her BC Liberal party ran on just weeks before. 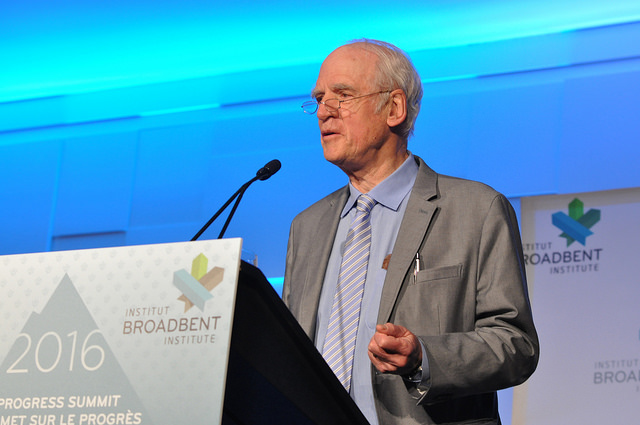 I had to watch Prime Minister Trudeau’s epic electoral reform meltdown from a distance over the past couple of weeks given my attendance at an international meeting of progressive policy leaders in South Africa.

Through my many decades of involvement in politics and public life, I’ve lived through a number of disappointments and broken promises.

Prime Minister Justin Trudeau’s decision to abandon his commitment to make the 2015 election the last held under the broken first-past-the-post electoral system is one of the most cynical I’ve seen.

On Donald Trump and the fight for progress in Canada

On January 20, a dangerous con-man took high office in the United States.

Openly trading in hate while ushering in more inequality will be Donald Trump’s MO for the next four years. While the far right gains ground globally, locally we’re not immune.  It is a troubling moment for progressives. It’s also an opportunity to respond and to act.

TORONTO—Executive Director Rick Smith is available to comment tomorrow on the final report of the special parliamentary committee on electoral reform, to be tabled in the House of Commons.

OTTAWA—There’s overwhelming support for proportional representation and now is the time to get on with designing a proportional voting system suited to Canada, says a diverse coalition representing the country’s leading women’s groups, the country’s largest unions, leading advocacy groups in Quebec, and organizations advocating for students and immigrants.

The Every Voter Counts Alliance, bringing together over 60 organisations, is making the call just as the special parliamentary committee on electoral reform is about begin its deliberations. The all-party committee is to release its report by Dec. 1.

The Every Voter Counts Alliance, bringing together over 60 organizations from across the country representing diverse groups, will be hosting a press conference on Parliament Hill later this morning just as the special parliamentary committee on electoral reform is set to begin its deliberations.

Speakers making the case for why it’s time to listen to the experts and Canadians -- and get down to business and develop a made-in-Canada proportional representation system include Hassan Yussuff, President of the Canadian Labour Congress, Katelynn Northam, electoral reform campaign lead at Leadnow, Farhat Rehman of the Canadian Council of Muslim Women and Annie Bérubé, director of government relations at Équiterre.

Election of Hillary Clinton May Support New Deal for Canadians

The results of United States Presidential elections always have major implications for Canadians. This time around, we may just see a boost to progressive politics North of the border.

It seems likely that Hillary Clinton will win big over Donald Trump, and that Democrats will also do very well in the Senate and House races, perhaps sufficiently well to win control of both Houses.

OTTAWA — It’s time to get on with designing a proportional electoral system suited to Canada, says a broad coalition representing the country’s leading women’s groups, the country’s largest unions, leading advocacy groups in Quebec, and organizations advocating for students and immigrants.