The Historical Imperative to Get Recovery Right

Public sentiment about recovery efforts has largely shifted from cries over when we can ‘return to normal’ towards arguments about how to ‘build back better’. The recent Federal election helped crystalize this switch, with all of the major party leaders echoing this sentiment in one way or another.

As an historian, my job is to look for clues in the past that may help guide us in the present and avoid repeating old mistakes. Research by myself and colleagues has been looking into what happens to societies as inequalities deepen and partisan tensions rise. What we’ve found is that societies simply do not fare well under these conditions – they become highly susceptible to unrest, outpourings of partisan violence, and in many cases simply fall off the map completely.

Unfortunately, this is the direction that we in Canada and many other societies around the world are heading in today. And while COVID-19 may have laid these issues bare, what was ‘normal’ before was simply not working for millions of Canadians. The moment now isn’t just an opportunity awarded by the chaos of the pandemic to do something better; it is absolutely imperative to become better than we were before. If we don’t, we are in danger of going the way that so many societies from the past have gone, from the Roman Empire to Tang China to the Ottomans to contemporary states like Yemen, Somalia, and Syria: social upheaval, violence, and even outright collapse.

So as we prepare to continue our recovery efforts under (another) minority government, it is critical that we know exactly what ills we need to correct to move forward and to ‘build back better’.

Lessons from the Past

Historian Edward Gibbon famously quipped that living under the Roman Empire in the second century CE was “the period in the history of the world, during which the condition of the human race was most happy and prosperous.” Periods like this — including well-known societies  like Medieval China, Classical Athens, early modern France, and many others — are often lauded for their flourishing economies, luxurious consumption, and incredible artistic achievements. But these seemingly grand eras were typically ‘golden’ for only a few wealthy elites. Inequality in all of these cases was severe. Eventually, the wealthy and powerful felt the sting of these disparities as well, as growing unrest among the populace and rising competition over a dwindling pot of spoils brough tensions to a head.

The experience of ancient Rome provides a clear illustration of this common dynamic. During the period that Gibbon declared humanity’s ‘happiest,’ scholars estimate that the richest  1% controlled almost 30% of Rome’s wealth. The wealthy virtually monopolized land ownership, leaving the rest of the population with expensive leases in rural areas or living in crowded cities where space was tight and disease was prevalent.

Sound familiar? It should also sound very troubling, as these were just warning signs for the chaos to come. Because these structural inequities just kept growing and Rome grew less and less resilient until, eventually, the Empire fell. When it did, it was not just ‘barbarians at the gate’ threatening from the outside, but because stark inequality, political tension, and widespread unrest caused the once mighty Rome to implode from within.

The trends seen in Canada and other Western countries in recent years bear remarkable – and disheartening – similarity to what is observed in past societies. This is why our present problems have been sadly predictable for those paying attention to the lessons of the past. So why have these trends been suffered for so long, or even lauded?

The answer is because they are largely masked behind the false lustre of growth.

Indeed, Canada’s economy has been growing steadily for nearly a century. The bulk of this output, however, has been captured by a smaller and smaller fraction of the population. The average worker has seen few of the advantages of this wealth increase, let alone the millions who suffer with unsteady or no wage income at all. Over this same period, as Figure 1 shows, real wage levels have been largely stagnant. The rising tide of decades of economic growth in Canada, as in the past, has raised only a handful of the most luxurious yachts, leaving the rest submerged. 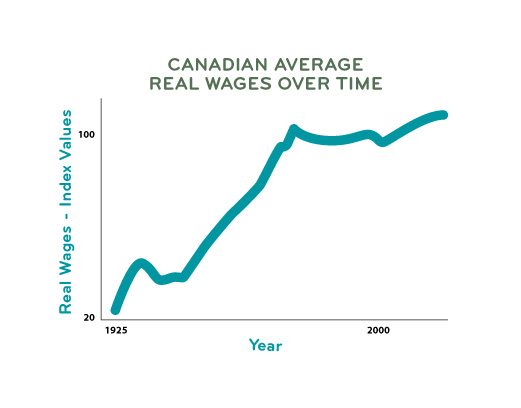 There are many reasons for this. One is that taxes on top earners have been repeatedly reduced in the last 50 years, while the number of loopholes available to those with wealth and corporations (e.g. stocks, valuable property, investments) have proliferated. As a result, the wealthiest 1% of Canadians now control over one-quarter of the country’s wealth.

Even life expectancy has stopped growing in the last few years (Figure 2) something the country hasn’t experienced since the Great Depression – a clear and disturbing sign that millions are experiencing negative health consequences. 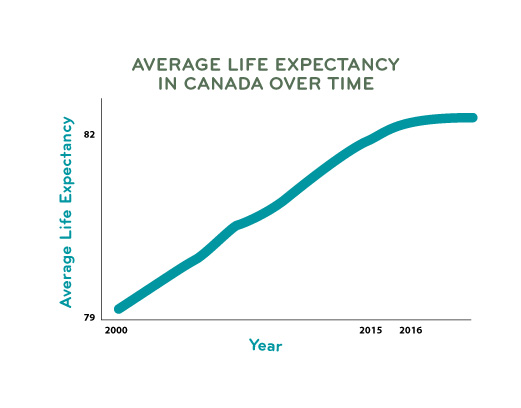 Each of these developments are troubling on their own, but together they are truly frightening. The widening gap between the haves and have-nots not only denies millions of access to wealth and power, but carries with it a host of related problems from chronic health issues to higher rates of drug abuse and suicide. Let’s not forget, demand for the material required to fuel all this growth has accelerated the devastating impact humans have had on the environment.

The clear lesson from the past is that, once the sort of inequality that beset the Roman Empire – or that we are experiencing in Canada today – sets in, more often than not it has proven disastrous and in many cases spelled doom for entire societies.

What history teaches us, time and time again, is that the level of inequality we face today affects everyone, not just those at the bottom but is equally corrosive at the top. With the election behind us and the new government busy formulating a strategy for the coming years, we need to ask ourselves what ‘better’ really means. How can we avoid repeating the mistakes of the past? How can we ensure this ‘better’ future is resilient against the forces that led us to where we are today and which have been the ruin of so many societies before us?

With enough political will, an awareness of the key drivers of crisis, and a recognition of the imperative placed on us, we can perhaps create not just a gilded society that works for only the privileged few, but an actual golden age of equitable, inclusive, and sustainable prosperity. The alternative is too grim not to.

Daniel Hoyer was raised with wealth and class privilege in Toronto / Tkaronto. He holds a PhD in Classics from New York University and currently works as Senior Project Manager and Lead Researcher of Seshat: Global History Databank and Part-Time Professor at the Centre for Preparatory & Liberal Studies at George Brown College in Toronto.