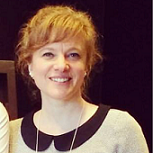 Andréanne Pâquet has worked for over 15 years fighting racism and islamophobia and working to create intercultural and interfaith dialogue.

A long-time human rights activist with groups such as Amnesty International, she co-founded the Fondation Paroles de femmes (Women’s Voices Foundation), an organization that works to create safe spaces for racialized women in and around Montreal. Since 2015, the Fondation Paroles de femmes has hosted a series of successful events touching on the role of racialized women in politics, in the #BeenRapedNeverReported movement, and in the arts.

For nearly a decade Andréanne held a variety of positions at ENSEMBLE pour le respect de la diversité, a Montreal-based NGO that works to mobilize youth and raise awareness on issues surrounding diversity in all its forms (sexual, ethnic, racial, religious, social, etc.). As part of that work, she travelled across Quebec facilitating workshops with young people aged 15 to 17 and co-created the Imprint Projects, a training program that supports young leaders in making an impact in their community.

In 2010, she founded Ce qui nous voile (Our Veil), a project using images to deconstruct preconceived notions about the Muslim veil and the women who wear it. The project was exhibited in multiple public spaces in Quebec, creating a discussion between the general public and the participants of the project. Some of the portraits taken for the project can now be found at the Canadian Museum for Human Rights.

Over the last few years, Andréanne has worked for and served on the boards of philanthropic foundations supporting social change as well as with organisations in the social economy and cooperative sectors. Andréanne has a degree in Anthropology from Université de Montréal and is a Ariane de Rothschild Fellow in Cross-Cultural Leadership and Innovative Entrepreneurship.