While it is now only just over a year since the Occupy Wall Street movement began to draw attention to the wide and growing gulf between the 1% and the 99%, many have been quick to dismiss its staying power. After all, it was pointed out from the very beginning that the Occupy movement really did not have much to offer in terms of concrete policy proposals. Asked by the Wall Street Journal last October about his views on OWS, Martin Feldstein, the prominent Harvard economist, could only say: “I can’t figure out what that’s all about…I haven’t seen what they’re asking for.”

But the vagueness OWS projects in terms of its policy proposals is hardly a basis for dismissing its significance.

It gave voice, and made more broadly known, some basic facts about labour markets. While the growing inequality in incomes, and in particular the sharp and growing division between the 1% and the 99%, is something that has been documented by labour economists for more than a decade, it is now headline news and the subject of serious policy discussion in a way that it was not before September 17th, 2011. And in important ways the social conversation has begun to move toward a clearer understanding of the underlying causes of inequality, why it is something we should care about, and what concretely can be done about it.

The Broadbent Institute's report “Towards a more equal Canada” is a healthy contribution to this discussion; based on a careful and solid reading of the facts, articulating a social democratic perspective on why they are important, and offering specific policy suggestions. Most importantly, the report shifts the discussion from the somewhat stale debate between those who advocate greater equality of outcomes through more income redistribution, and those arguing against this zero-sum thinking because of its purported consequences for economic growth.

Rather, it underscores the point that inequality is of consequence because it has the potential to erode opportunity, to diminish the capacities of citizens, and to result in a less stable and ultimately lower growth macro-economy.

It is this issue that I would like to amplify, the claim that: “If there was real equality of opportunity in our society, where children eventually ended up on the income ladder would depend mainly on their individual talents and hard work, not on the income and status of their parents.” In fact, it is very much the case that more unequal societies are also societies in which a greater fraction of economic advantage and disadvantage is passed on between parents and their children.

It is now common to represent this relationship with what Alan Krueger, the current Chairman of the Council of Economic Advisors---the in-house economic think-tank of the US president---referred to as “The Great Gatsby Curve.” 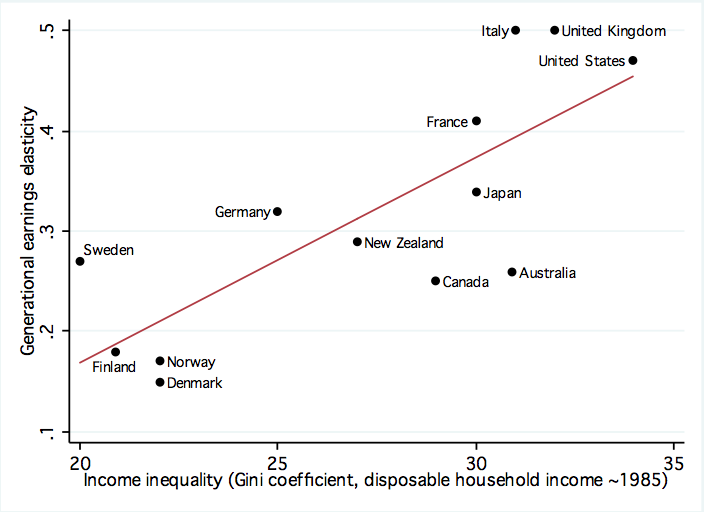 This curve ranks countries along two dimensions. Moving horizontally from left to right represents a movement from low inequality to high inequality: Finland, Sweden, Norway, Denmark being the most equal countries, the United Kingdom and the United States being the least. Moving vertically from bottom to top represents a movement from more mobility in economic status across the generations to less mobility. In countries like Finland, Norway, and Denmark the tie between a parent's economic status and the adult outcomes of their children is weakest: less than one-fifth of any economic advantage or disadvantage that a father may have had in his time, is passed on to a son in adulthood. In contrast, in Italy, the United Kingdom, and the United States roughly 50% of any advantage or disadvantage is inherited by the next generation. If a father was earning twice the average income in Denmark he could expect his son to end up being only about 15% above average; in the United States this would be 50%. In short, more inequality at a point in time is associated with a greater stickiness in economic status across the generations: in more unequal societies the poor are more likely to see their children grow up to be the next generation of poor, the rich are more likely to see their children remain at the top rungs.

Canada occupies a middling position relative to many of the other rich countries to which it is often compared. Moderate levels of inequality about a generation ago were associated with a moderate tie between family background and life chances. This situation reflected the prevailing nature of families, jobs and wages, and government programs: the experiences of a cohort of young people born in the 1960s, who attended the schools of the 1960s and 1970s, the post-secondary institutions of the 1970s and 1980s, and who found a foothold in the labour market of the 1990s. As “Towards a more equal Canada” makes only too clear, this was a very different context than that being faced by the current generation of young parents and their children.

The degree to which life chances are tied to family background, the degree of equality of opportunity, is determined by the interaction of three fundamental social institutions and the extent to which they level the playing field: the family, the labour market, and government programs. Families are the most fundamental influence on a child's life chances. The extent and way in which parents form the human capital of their children is at the very heart of their capacity to become all that they can be. These investments are surely influenced by money, rich parents having more scope to develop their children's skills and attitudes, and enriching their day-to-day experiences. But they are also non-monetary, reflecting the development of values, motivation, and aspirations.

Canadian families, simply put, are much more diverse now than they were a generation ago: more diverse in make-up, be it single-parent or two-parent, but also in education levels, ethnicity, immigrant origins, and relatedly in their connections to the broader community and knowledge of the care-giving resources to be drawn upon.

In part, this diversity is demographic in origin, but in part it also reflects the nature of the labour market with which parents must engage to support their children. For all the reasons outlined in “Towards a more equal Canada” the Canadian labour market is much more polarized now than a generation ago: a higher return to a solid education has led to those in the roughly top 20% making more, while those in the lower middle-class have witnessed stagnation if not outright erosion in their material standard of living as a result of the interaction of globalization and technical change, and the consequences these forces have had for the nature of jobs and pay. Similar forces have contributed to a significant breaking away of those at the very top of the income hierarchy. In short, a much more unequal labour market has changed the capacities of parents to care for and invest in their children. The playing field, with respect to both family and market, is not as level as it used to be.

This makes the role of public policy all the more important. The greater the degree to which it is “progressive”, broadly speaking of relatively more advantage to the relatively disadvantaged, the greater will be the degree of income mobility across the generations. Broad-based, universal, and effective government support---both income support but also support in the investments made in the health care, education and socialization of children---financed according to ability to pay, will fill the gap in family resources and buffer the relatively disadvantaged from a more turbulent labour market. In the past, structuring public policy along this principle served to level the playing field, and promote the life chances of children from relatively disadvantaged origins. In doing so public policy blunted the degree to which inequality was passsed on across generations, and promoted equality of opportunity.

But there is nothing inevitable about this role. Public policy can just as easily be designed to be of relatively more advantage to the advantaged. And this, I believe, is the worry expressed by the Broadbent Institution's report: that inequality will also inform public policy in way that erodes a collective project, that leads to a smaller role for government, and does little to prevent labour market inequalities from being echoed in the capacities of families, and ultimately leading to life chances being increasingly tied to privledge.

It seems, in this sense, all the more appropriate to be exploring and evaluating public policy options according to their capacity not simply to offer income support and re-distribute resources, but also in promoting the capacity of children to become all that they can be regardless of their starting point on the economic ladder. Indeed, this is exactly what the conversation should be about, and this is what Canadians should be asking for in an era of increasing inequality.

Miles Corak is a professor of economics with the Graduate School of Public and International Affairs at the University of Ottawa, and can be reached through his blog at milescorak.com or via Twitter @MilesCorak.