Ottawa wants change, but what does change look like?

Ottawans have a lot on their minds when it comes to their municipal election ballots this fall: the City’s mismanagement of the response to the convoy occupation, cuts to bus service while the public-private partnership (P3) LRT continues to fail and derail, and $2,890 monthly rent in the city being considered “affordable housing”. With the retirement of Mayor Jim Watson and several members of the current City Council, there are opportunities for progressive electoral breakthroughs and renewed vision for change for the city, but how strong is Ottawa’s desire for change?

The Broadbent Institute was recently in the field in August, with Viewpoints Research, digging into this question. 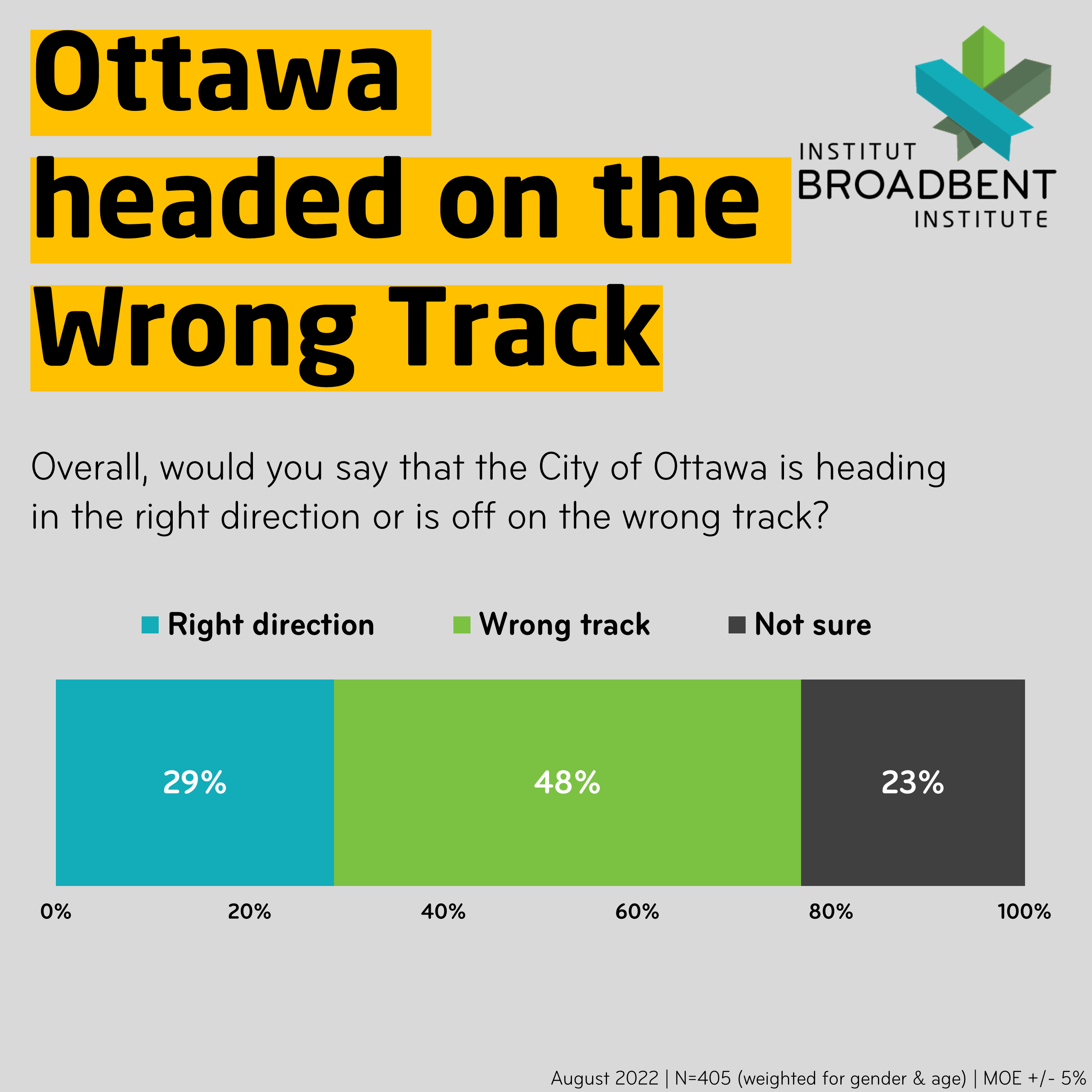 Right away, it’s apparent that there’s a strong desire for change from the status quo in Ottawa. Nearly half of survey respondents felt that the City of Ottawa was “off on the wrong track.” In our follow up, some survey respondents felt as though the city was run by the “Watson Club” or an “old boys club” that hindered community engagement and development that worked for residents. Those that felt Ottawa was on the wrong track also expressed a desire for new leadership that worked collaboratively with communities, instead of steam rolling an agenda set by the well-connected through City Council.

Looking into the priorities and direction that Ottawa voters want to take City Hall gives us a good look at what that change ought to look like. 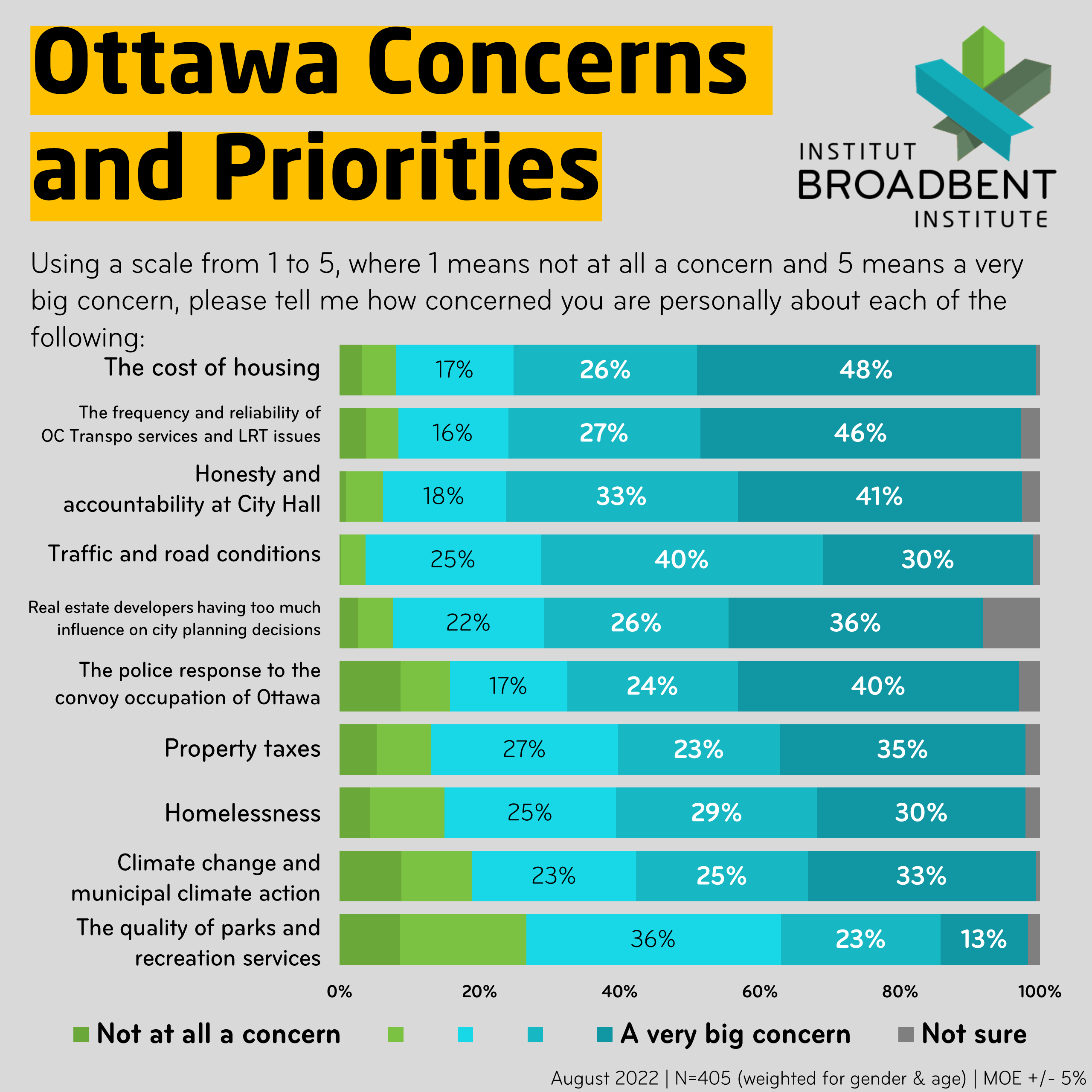 The cost of housing, OC Transpo reliability, as well as honesty and accountability at City Hall rounded out the top three concerns for Ottawa voters. Given the aforementioned high profile issues, it becomes clear how these priorities are stacked against other big issues of concern.

Of note is the high proportion of Ottawa voters unsure (8%) about real estate developer influence on municipal politics, while concern for the cost of housing is the highest priority. Developers have had a major influence on Ottawa’s city planning and housing affordability, which have had questionable and negative impacts on neighbourhoods and the environment. Developer influence on Ottawa City Hall has been behind the largest housing eviction in Canadian history, a lack of consultation on the failing Lansdowne development, and suburban sprawl into ecologically necessary Greenbelt land. Following up with survey respondents, they expressed that newly built housing was necessary, but that new units being built were still inaccessible and unaffordable as developers pocketed the profits.

Despite middling concern around developer influence on Council proceedings, Ottawa voters are clear (84%) that they do not want to see real estate developers donating to municipal candidates. 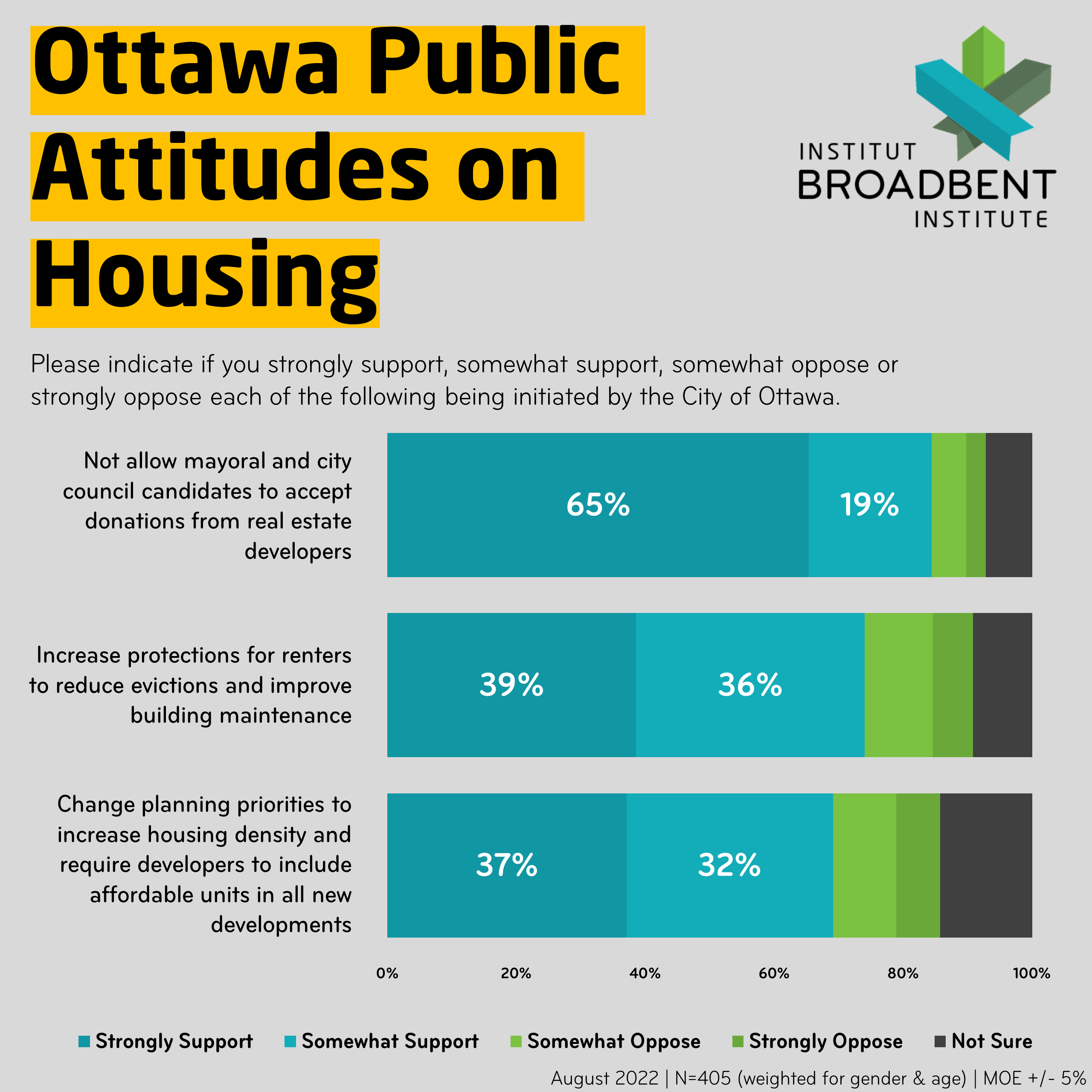 An overwhelming 84% of Ottawa voters do not want mayoral and city council candidates to accept donations for real estate developers. Digging deeper with voters, there is deep concern about developer donations, with feelings that it’s a “conflict of interest” to be so close to City Hall, even feeling that the relationship feels “a little icky.”

Horizon Ottawa’s Follow the Money database shows that almost half of Ottawa City Councillors and Mayor Jim Watson received a majority of their 2018 municipal election campaign from people connected to the development industry. When it comes to developer influence on Ottawa City Hall’s housing and planning decisions, there’s a clear connection to the suburban ward City Councillors receiving campaign donations. For instance, one Kanata-area Councillor received 99% of his campaign contributions from those directly connected to the real estate industry.

Tied to the cost of housing concern and developer donations is strong support to increase protection for renters and changing planning priorities to require the development of affordable housing. Support for a progressive municipal housing agenda is strong in Ottawa, and any recognition that municipal candidates would be influenced by real estate developers could draw public outcry. 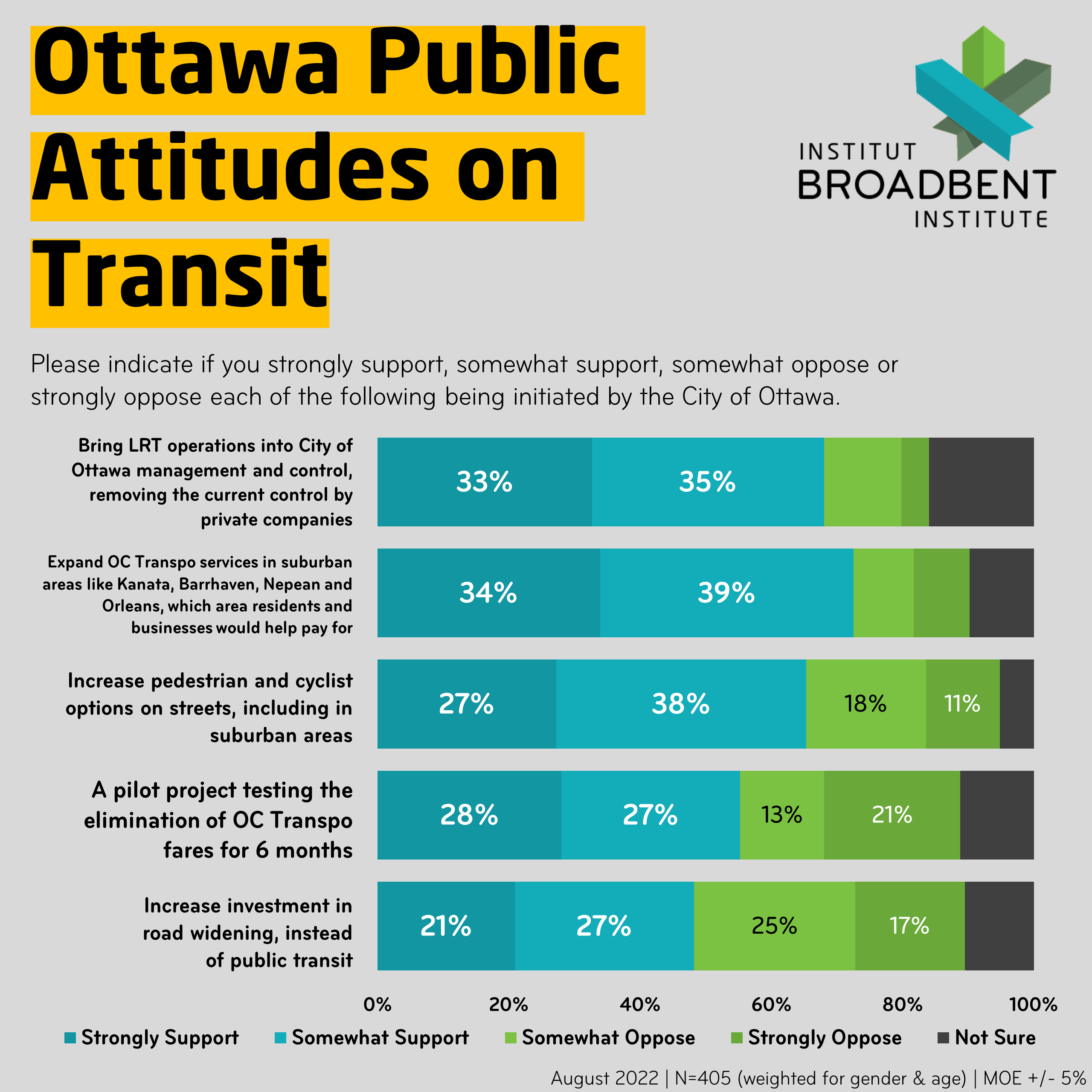 On public transit, there’s clear support for progressive change in expanding the system and increasing reliable service that stem from Ottawa’s ongoing experiences with cuts to OC Transpo bus services, that in turn made way for the problem plagued P3 Confederation Line LRT. The stories, scandals, and issues since the LRT project first put shovels in the ground in 2012. The sinkhole that appeared in the middle of Rideau Street in 2016 that collapsed a tunnel and delayed opening well past its 2017 timeline was just the beginning of a long list of issues. From stations that stink of sewage, blowing past four opening deadlines for more than two years, trains that can’t function in Ottawa’s winter weather, constant derailments, to overpaid consultants with questionable ties testifying in front of public inquiries, the LRT situation has been a big mess for downtown Ottawa while, according to our follow up discussions with survey respondents, suburban Ottawans feel ripped off or neglected with a transit system that does not serve them and took their reliable buses away.

The discontents that stem from these episodes show clear support (68%), as well as a large proportion (16%) of respondents who are unsure, for bringing LRT management into City of Ottawa control and out of the auspices of the Rideau Transit Group private sector consortium. While most clearly recognize the dysfunction owned by the private sector on what is ostensibly a public good, the nature of P3s mask the for-profit actors and mechanisms behind these public good projects making it unclear who is to blame for performance or cost issues. However, as issues with the system keep piling on as the model is again being used to expand the dysfunctional system further, public opposition to this model is solidifying given the costs and cuts to service elsewhere.

Given the issues with the LRT, it’s not surprising that there’s even stronger support for investment in expanding public transit into suburban neighbourhoods (73%). In following up with voters, both suburban transit users and even regular automobile commuters noticed the decline in reliable bus service in their neighbourhoods in years prior to the pandemic. For many suburban travelers, bus service on transitways and through neighbourhoods was quick and reliable. In suburban wards, voters concerns about bus service cannot be ignored when it comes to producing a progressive agenda for the city’s transit system.

A 6-month fare free transit pilot program is also supported by a majority of voters (55%), though not as high a priority as expanding service and improving reliability. Fare free transit was previously implemented for a month in December 2021 as a way for the Watson administration to restore confidence in the transit system after the LRT’s numerous failures. With pandemic ridership levels, the month of free transit was estimated to cost the city only $7.2 million which was money withheld from the RTG P3 consortium after delays. As free transit becomes a contested wedge issue in this municipal election, it is worth noting the strong support a 6 month pilot holds among Ottawa voters.

Garnering the least support is a desire to hold on public transit investment and instead invest in further road widening across Ottawa where 48% approve compared to 42% opposing. Road projects are substantial pieces of Ottawa’s 2022 infrastructure budget, with $62 million set aside for a handful of road widening projects for a stretch of a few kilometres around arterial traffic bottlenecks. For comparison, $11.5 million was budgeted for pedestrian and cycling infrastructure, though it enjoys greater appeal (65% support). With the effects on traffic negligible while environmental costs run high, progressive campaigns can point to road widening as an issue championed by developers and their City Hall allies that won’t relieve congestion, cut costs to commuters, or reduce greenhouse gas emissions. 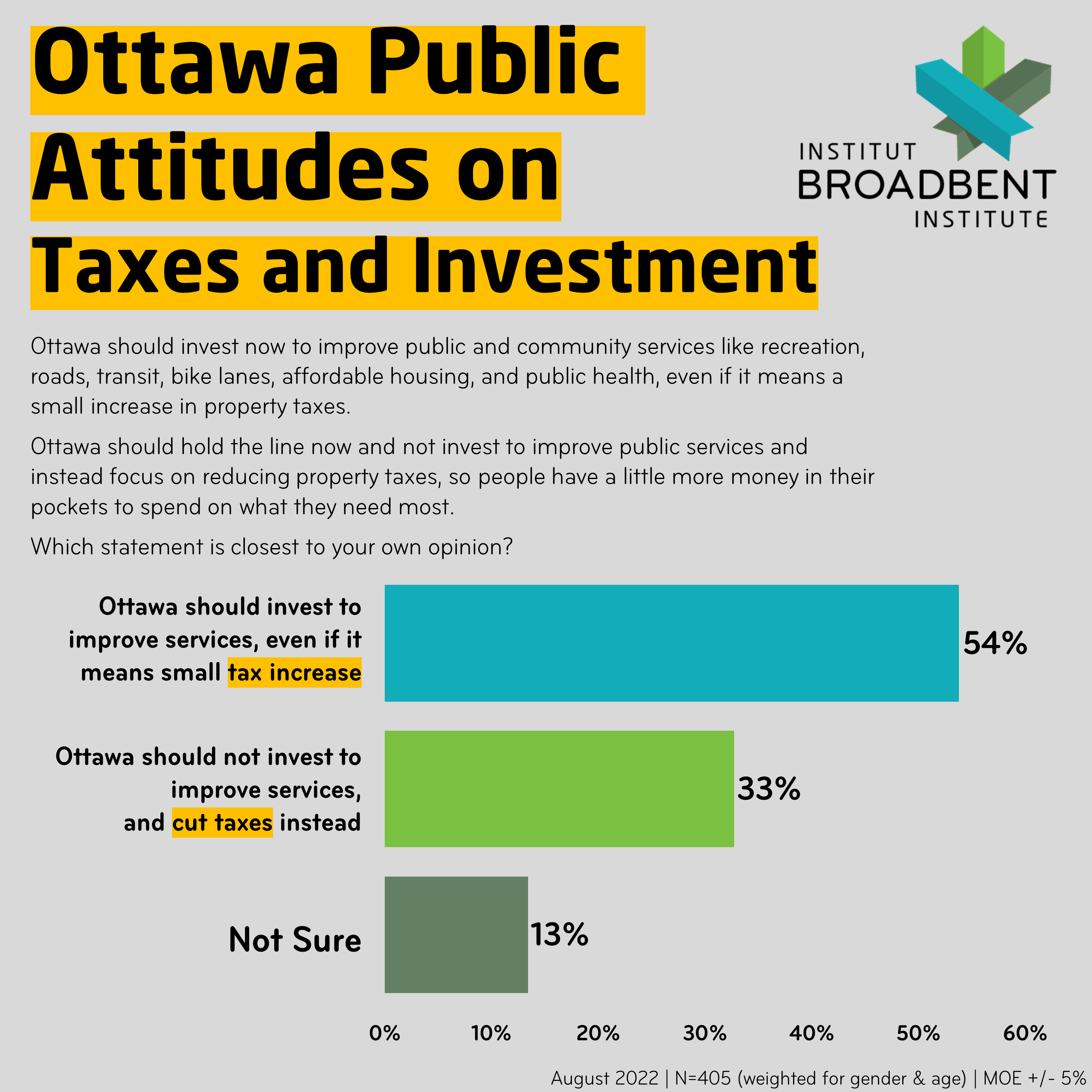 Lastly, looking at support for increased investments to improve municipal services, even if it means a small tax increase (54%) indicates a notable appetite for change in Ottawa. Even Jim Watson in the previous election promised small property tax increases to invest in improved services, though his priorities opted for P3 transit projects, road widening and inflating the Ottawa Police Services budget. A progressive vision for the City of Ottawa should already have the revenue and support to build just and equitable communities, and campaigns to move that agenda forward do not need to fall into rhetoric supporting tax cuts given its meager support (33%).

From our field research, Ottawans are demonstrating a desire for a bold progressive vision that prioritizes equality over tax cuts, investments over austerity, and new leadership that works with communities instead of well-endowed interests. Electoral campaigns and social movements should work with each other in these weeks running up to the October municipal election to ensure that Ottawans recognize that they are in this together with their neighbours and fight for a better city that works for its residents, and not the members of well-connected club.

Download our report on Ottawa public attitudes to municipal issues related to the 2022 municipal election.