Our emerging leaders kicked off Camp Progress Plus+ with a week of intensive training in Barrie, Ontario led by key architects of the 2008 and 2012 Obama campaigns, developing skills in grassroots organizing, digital communications and data-driven campaigning. 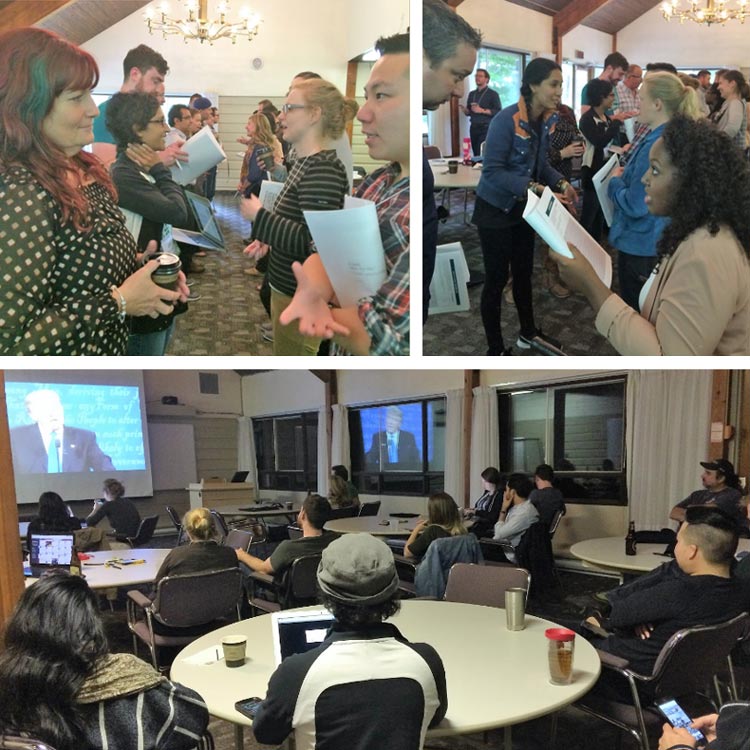 After five full days learning cutting-edge campaign strategies and tactics, nine members of Camp Progress Plus+ spread out across the United States to Virginia, Ohio, Colorado and Washington state to see how their new skills compared with how politics works in practice during the critical “get-out-the-vote” phase of the 2016 US election.

Here are a few of their takeaways:

1. Data-driven campaigns have their limits

With technological advances in recent years, campaigns have scrambled to figure out how to take advantage of data and metrics.

But many organizers feel like the new focus on data has created new sets of problems – one organizer who worked in Colorado said the Clinton campaign’s big focus on data and metrics led to too much “top-down” decision-making:

“I noticed that we placed much more value on the metrics related to volunteers (how many came out, how many shifts they completed) and almost no value on their experience or feedback… The best volunteers were the ones who felt personally connected to the campaign and the office and felt confident enough to go out and talk to people and organize on (mostly) their own terms. I tried to empower people to take ownership of their volunteering and do it in a way that felt good to them, and I made sure to thank them profusely for it whenever possible.

Another organizer on the ground in Ohio observed that all the data they had at their fingertips was useless without a message that connects:

“I spent too much time on the phone and too much of it talking to Trump supporters because the data was so incorrect and the leadership thought that harassing people seven times a day to volunteer was going to help us win – it wasn't, and it didn't.Data and facts do not help if your narrative is incorrect ... We have to speak a simple language that aspires to bring something better to people's lives –then use the facts and data to meet that narrative.”

This thought from an organizer in Seattle just about sums it up:

“The most expensive campaigns are not necessarily the best campaigns.”

A recurring theme we heard from organizers was that campaigns need to do a better job at listening and having two-way conversations.

One organizer in Colorado said they thought this one thing alone could have helped Clinton’s campaign adapt when the mood “changed on the ground”:

“The campaign was very top-down versus two-way communication ... I suspect that the national campaign's failure was at least in some part related to their unwillingness to change strategy and tactics when the information / public sentiment changed on the ground.”

Another organizer in Colorado agreed – the campaigns themselves were structured in a way that useful feedback from local communities couldn’t move up “the chain of command”:

“We have to listen as much as we talk … We have to know what people think before we can build meaningful resistance messages that will resonate … Volunteer feedback never made it back up the chain of command. It died with me or the organizer, from what I can tell.”

And an organizer in Washington suggested a “bottom-up” approach that prioritizes relationships and grassroots community-building could be a more effective approach:

“Bottom-up is better than top-down. Leaders and organizers can be more effective by engaging and empowering others through grassroots campaigns ... Prioritize relationships, connect with people, allow for fun, make volunteering an event – build community and always bring banana bread!”

3. They could sense something was happening just by being on the ground

While the 2016 election results surprised journalists and pollsters, our Canadian organizers said they felt the ground shifting well before election day.

One organizer in Ohio said many Americans were disengaged from politics, something they sensed was linked to the poverty and inequalities they encountered:

“I met many people who would not vote – the people in poverty in America who neither side ever make reference to because they don't have any plans to increase welfare or healthcare, I found the number of people living with disabilities alarming. Many people I met worked two or three jobs because Ohio doesn't have a lot of opportunity.”

That’s echoed by another campaigner in Colorado, who felt Trump’s supporters had “diagnosed a real problem” that Clinton’s messaging was missing:

“Trump’s supporters have diagnosed a real problem but are looking to the wrong solution … Hillary's campaign messaging was not strong enough for the political climate and did not change as the election became more intense.”

And another campaigner on the ground in Colorado noted Clinton’s message was not just failing to fire-up the progressive base – it was also falling flat with independents and non-voters:

“Clinton was not the ideal candidate. She was surely the most qualified candidate, but … she failed to mobilize the democratic base, especially those who had supported Sanders or joined the party because of him. The campaign failed miserably in trying to convince independents and those who do not vote to vote for Clinton.”

In response‎ to the rise of Trump and the extreme right, the Broadbent Institute is launching the Leadership Training Scholarship Fund to help train ​Canada's ​young and emerging progressive leaders.

​Know someone who would benefit? ​Fill out our scholarship application today: www.broadbentinstitute.ca/training