The economic shock of the pandemic inevitably caused a lot of the economic irregularities such as spikes in unemployment, acute losses in productivity coupled with short episodes of increased spending, and unstable price changes experienced in Canada and around the world over the past two years. In particular, this instability has enabled record profiteering under the guise of reacting to inflationary pressures.

Price inflation is a phenomenon of economic growth in a capitalist economy–an indicator of more activity being added to an economy. Typically, this means the value of goods and services increases, and under normal circumstances, the price of labour in the form of wages rises too. In the context of the COVID-19 pandemic in Canada, however, the price of everything else has increased at an accelerated pace while the price of labour has not kept up. While others have rightly pointed to corporate profiteering adding fuel to the pandemic’s inflationary fire, stagnant real wages (a measure of wages adjusted for inflation) have also contributed to the affordability crisis and cannot be ignored.

The consistent gaps between Canada’s inflation rate and wage growth rate since the start of the pandemic reveal much about today’s affordability crisis. 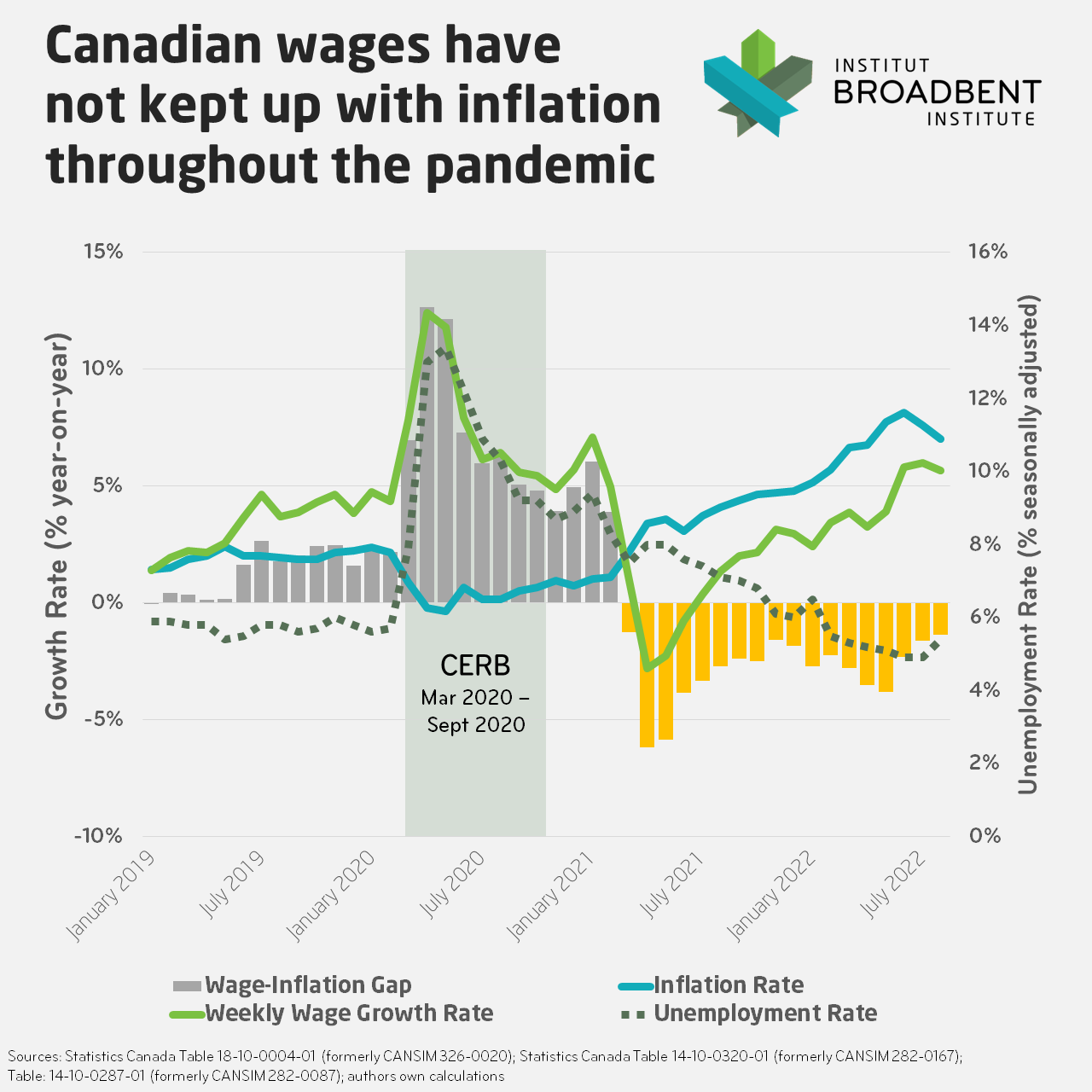 While average wage growth seems to have increased during the first pandemic lockdown in March 2020, this average is skewed by the loss of hours among lower-wage workers. This trend was also accompanied by a massive increase in the unemployment rate as well as a short period of time that flirted with economic deflation. While those that were forced out of the labour market were temporarily sustained by the Canada Emergency Response Benefit (CERB), wage growth continued among higher income earners and prices remained stable over the course of the first year of the pandemic.

These trends come crashing down as CERB is removed and low-wage workers return to jobs. During this time, many workers returned to jobs with lower wages than before while the inflation rate blew past the Bank of Canada’s target rate of 2 percentage points. Since the summer of 2021, wages have not kept pace with inflation and a sustained wage-inflation gap has brought the cost of living to new crisis levels. As the negative gap between wages and inflation persists, the real wage and purchasing power of the working-class is weakened as the price of work is kept low.

In recent months we have seen the Bank of Canada use old-school monetary policy to raise interest rates in a bid to reduce inflation, primarily focused on housing sector prices that make up an increasingly unaffordable part of the consumer price index (CPI) basket. There are some indications that this has helped to cool prices in the buyers market, though not enough to make housing truly affordable and has been accompanied by increases in rental market prices. Furthermore, it is a policy tool with limited effects on fighting unstable energy prices and grocery store profiteering. 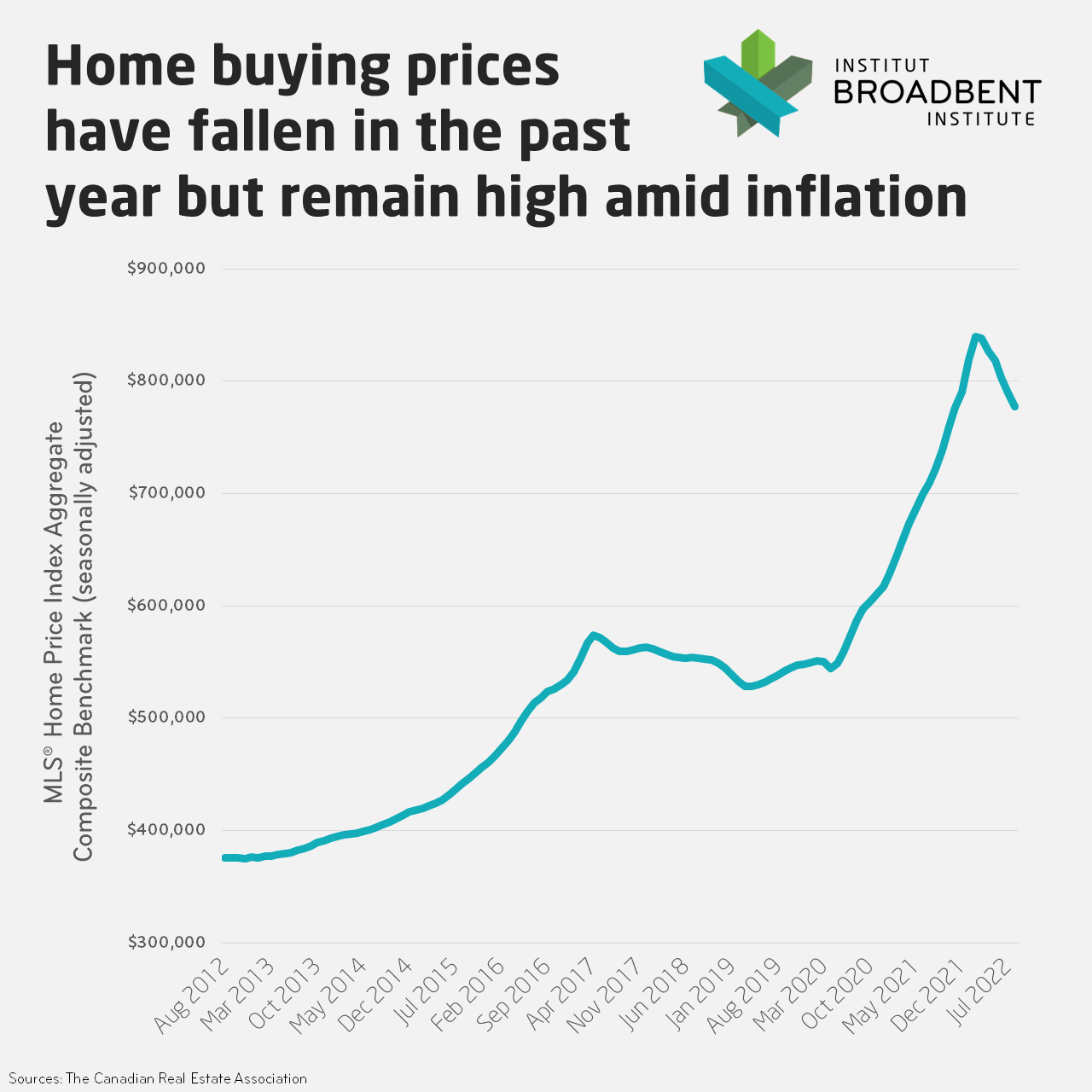 This policy choice can also lead to stagnant wages, a higher unemployment rate, and greater inequality, especially when interest rates are increased without increased public investment. After more than two years of being hailed as heroes through the pandemic, healthcare workers wages have been left behind, even with some nominal wage growth in other sectors. How are we supposed to staff hospitals and clinics if healthcare workers can’t even afford groceries due to falling real wages? 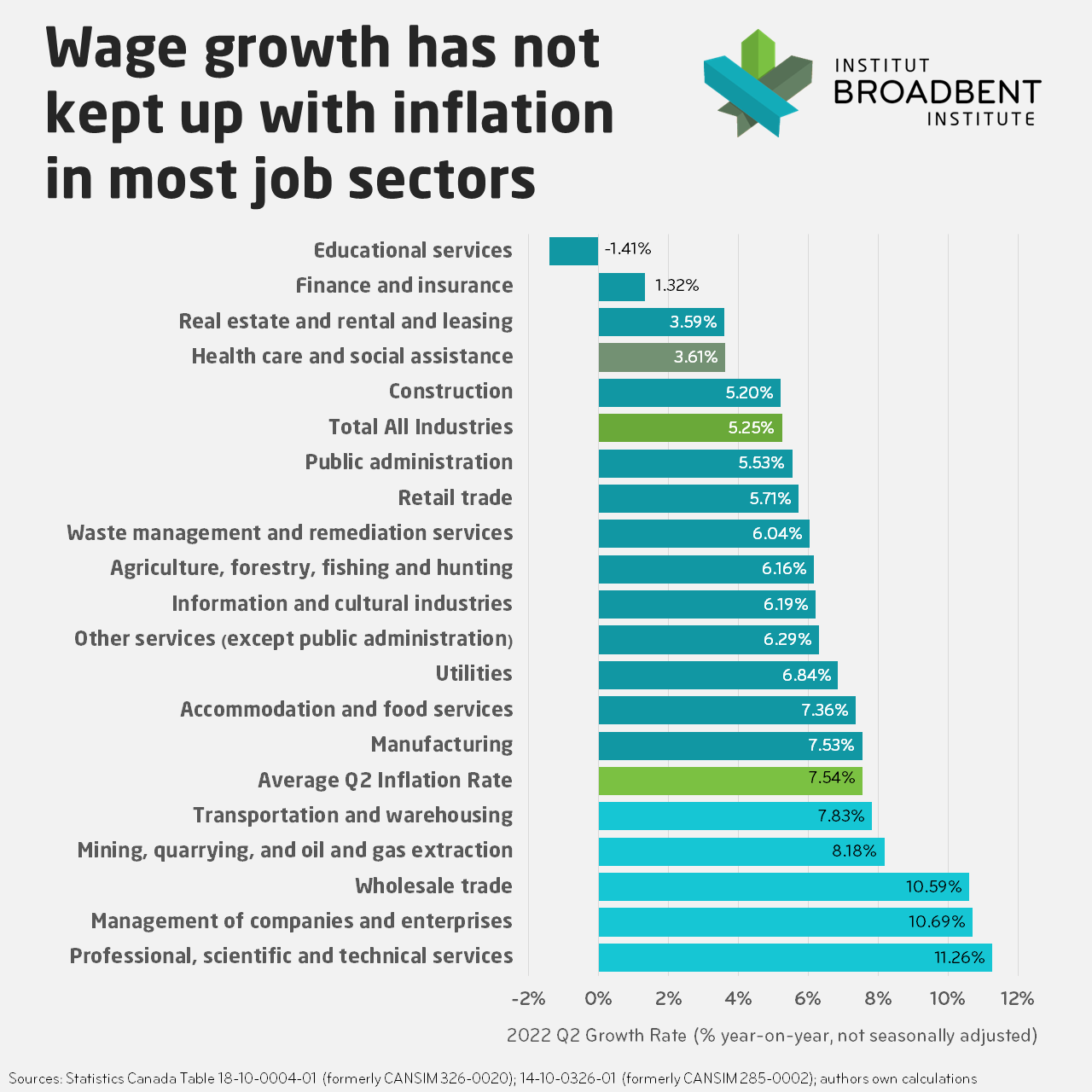 Unique from previous recessionary episodes is the historically low floor for interest rates that we saw after the 2008 recession and the initial months of the pandemic. As interest rates are raised to cool inflation, will governments use the still comparatively low rates to make investments and ward off the negative effects of an increasing price for money? Using monetary policy alone to tackle some CPI indicators is not enough. Without redistributive policies, monetary policy alone can be detrimental to employment and wages. In addition to tackling profits through windfall and wealth taxes to fight price inflation everywhere else, we need to increase the price of labour. Governments must raise minimum wages to keep up with inflation, invest in decommodified housing, empower unions to defend workers' wage bargaining rights, and ensure healthcare workers are not left behind after years of fighting on the pandemic frontlines.

Statement on the passing of Bill Blaikie

After a multi-year battle with cancer and time in palliative care, it is with great sadness that we acknowledge the death of our friend and colleague Bill Blaikie.

Bill proudly represented the Winnipeg area of Elmwood-Transcona from 1979 to 2008 as MP and from 2009 to 2011 as an MLA. A leading member of the New Democratic Party, Bill advocated for social and economic justice alongside our Institute’s founder, Ed Broadbent, for many years. Bill joined the board of directors in 2019, where he used his wisdom and perspective to help guide our organization. In 2020, Bill was appointed to the Order of Canada for his lifelong contributions to parliamentary service and social activism.

A theologian and clergyman by trade, Bill’s political life followed the same “social gospel” tradition of other notable progressives like J.S. Woodsworh and Tommy Douglas. Bill wrote about this unique political experience in his book The Blaikie Report: An Insider's Look at Faith And Politics.

“Canada has lost a giant of a man. Bill Blaike was one of the most distinguished social democrats of our age. His deep commitment to equality shone through at the highest levels of political life, in Parliament and the Manitoba Legislature in which he served. I will always recall his speeches. His voice ringing with passion for justice was invariably captivating, holding the attention of political friends and foes alike. He was remarkable. My deepest sympathies go out to Brenda and his children.” Ed Broadbent, Founder of the Broadbent Institute.

“Progressives across Canada looked to Bill Blaike as a philosophical and spiritual thinker. He was eloquent, steadfast in his values, and so deeply committed to making life better for all Canadians. His loss will be deeply felt in our movements,” said Jen Hassum, Executive Director.

Like others who knew and loved Bill, we draw strength and hope from his legacy now. Much of what we do at the Broadbent Institute is in keeping with the ideas Bill contributed to the world and follows the example he set. We will honour Bill by continuing this work. 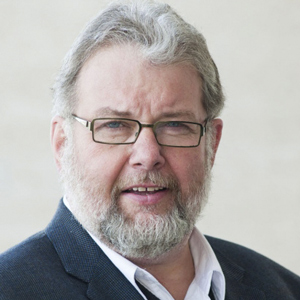 Statement from Ed Broadbent on the departure of Alejandra Bravo

After seven years at the Broadbent Institute, Alejandra will leave the organization at the end of September.

As Director of Leadership and Training, Alejandra helped built the backbone for progressive organizing in Canada. She led the Institute’s campaigns for electoral reform, has led countless workshops and training sessions for progressives across the country and was the Director of the Power Lab, a joint project between the Broadbent Institute and the Atkinson Foundation, which built capacity for local organizing. Most recently, Alejandra curated the 2022 Progress Summit, our first in-person Summit since the pandemic began. Her work in this role brought together the different corners of the progressive community and helped us know each other and work better together.

I want to thank Alejandra for her commitment to the progressive movement the power that we can have when we work as a collective. On behalf of the board and staff, I say a Big Thank You and wish you all the best.

No mental healthcare without pharmacare

When thinking about mental health care, one would expect medication coverage to be included. While mental health and pharmacare are parts of universal health care for many countries, Canada lags behind as the exception.

Currently, pharmacare coverage only includes medically necessary medications given in hospitals and physician services. In Ontario for instance, those below 24 years and over 65 years may qualify for the Ontario Drug Benefit program, however this program only covers a select number of medications. Unfortunately, there is no coverage for community-based, non-physician mental health services or prescription medication for mental health therapies.

According to the Advisory Council on Implementation of National Pharmacare 1 in 5 Canadians struggle to pay for medications and either do not have prescription drug insurance or the plan they have is inadequate to cover their medical needs. According to Statistics Canada, 2.3 million Canadians do not have their mental health care needs adequately met. The limited access to medications does not help save money, either. In actuality, the pharmaceuticals industry plays a big role in our economy with medications being the second biggest expenditure in the Canadian healthcare system after hospitals.

The current mix of private and public drug programs leaves us with a fragmented system that creates accessibility gaps and high costs of medication, putting many Canadians' health and well-being at risk. In addition, each province governs its pharmaceutical system, leading to disparities in the system. This has also led to disparities in mental health services across Canada.

The financial barriers Canadians face to accessing pharmaceuticals is an important factor to the under-use of mental health treatments. Even those with private insurance lack access to some mental health medications, with only 19.3% of individuals actually receiving treatment.

Canada is the only country with a “universal” healthcare system that does not include pharmacare. Countries such as Germany and the United Kingdom offer universal drug coverage that includes access to psychiatric medication. The United Kingdom, for example, provides free prescriptions in Scotland and Wales. While England requires some prescription charges, however, the majority of prescribed medications are offered free of charge, or come with the option to purchase a prescription prepayment certificate.

Where do we go from here?

Building a universal public drug coverage program has been attempted throughout Canada’s history of medicare, but it has been a continued political struggle. Opponents of universal pharmacare believe the current system works well for most Canadians, and we should just fill the gaps in coverage without building a real alternative to the for-profit system. However, this is far from true. We have seen in the United States that the fragmented system of filling in the gaps actually widens the accessibility gap of resources. Without pharmacare, we cannot truly make progress in treating mental health illnesses. The Broadbent Institute report Pharmacare Now outlines two pathways for Canada to achieve a national Pharamcare program.

One option is to have a Federal-Provincial-Territorial program, which has the federal government set standards similar to the Canada Health Act while providing some transfer funding. Under this option, the funding would be provided under two kinds of schemes: universal coverage for essential drugs with no co-payments or deductible; or have an arms-length body identify a list of essential drugs and negotiate with drug companies on prices.

The second option to consider is a federally funded agency in charge of financing, regulating, and administering coverage programs. This approach was successfully used to establish Canadian Blood Services and was able to achieve cost savings.

Solving the inequality in medicine is not something that can be solved by one policy change. Still, if we want mental health to truly be a part of our healthcare system, we need pharmacare to treat these health issues. A major shift is needed towards a universal pharmacare plan. It is not a matter of if we can do it, but a matter of when our government will take action and make the change.

Amal Abdulrahman is a fellow of the Diversity Youth Fellowship hosted by the Urban Alliance on Race Relations, and graduate student in International Health at Johns Hopkins Bloomberg School of Public Health.