How the Electoral Left Builds From Here: Ontario Election Debrief 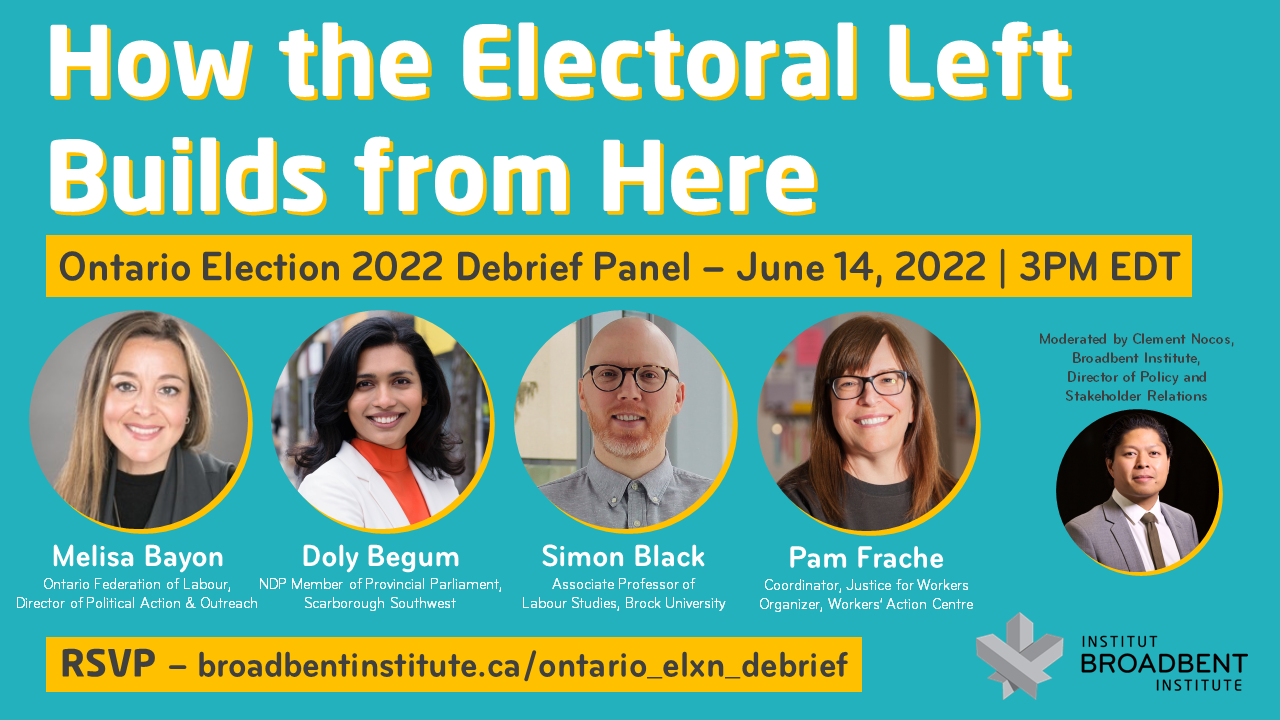 The Broadbent Institute has convened progressives for 11 years to tackle the largest issues in the country. Whether it has been combatting the conservative movement offering bold solutions for the pandemic, or defining the principles of Canadian Social Democracy, we have brought together our community to make real change.

Our next challenge is finding the solutions we need to win Social Democratic campaigns.

Elections are one opportunity to contest and build power for meaningful change. The most recent Ontario General Election was disappointing for many progressives, with voters simultaneously supporting social democratic policy while also deciding not to cast a ballot. This event started a conversation about where we go from here.

On June 14th, the Broadbent Institute hosted an interactive conversation about the future of social democratic campaigns.

Melisa Bayon  - Melisa Bayon is Director of Political Action and Outreach at the Ontario Federation of Labour. She brings fifteen years of organizing experience across North America in precarious sectors such as hotels, food service, casinos, and homecare.

Pam Frache - Pam Frache is the coordinator of the Justice for Workers campaign and an organizer with the Workers' Action Centre. Previously, Pam has been part of the staff team at the Ontario Federation of Labour serving as Education and Research Director. Pam is a longstanding social justice activist based in Toronto

Simon Black - Simon Black is Associate Professor of Labour Studies at Brock University where he is also a faculty affiliate in the Social Justice and Equity Studies program. Simon writes and speaks on work and labour, cities, social inequality, and social movements. He is the founder of Labour Against the Arms Trade, a coalition of peace and labour activists working to end Canada's participation in the international arms trade and secure a just transition for arms industry workers.

Doly Begum - Doly Begum is the Ontario NDP Member of Provincial Parliament for Scarborough Southwest. Doly was the chief coordinator of the Keep Hydro Public campaign that successfully stopped the privatization of Toronto Hydro and Wasaga Distribution. She is the former Co-Chair of the Scarborough Health Coalition and Vice-Chair of Warden Woods Community Centre. She was elected to the Ontario Legislature in June 2018 and is the first Canadian of Bangladeshi origin to hold elected office in Canada..